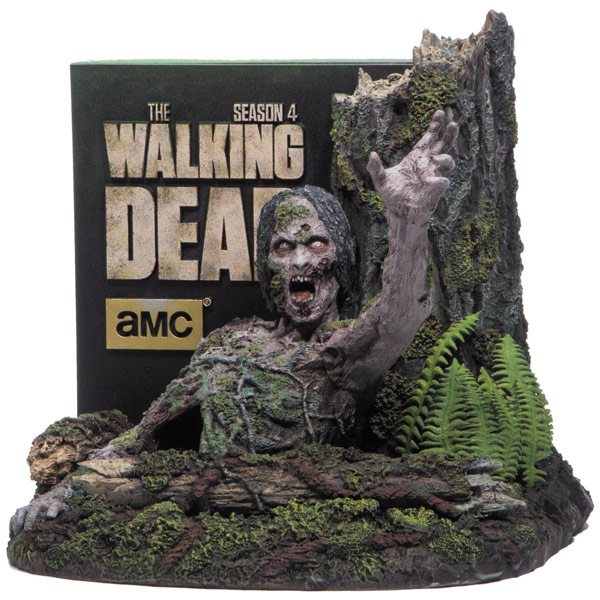 Another awesome blu-ray collection of everyone’s favorite zombie plague survivors is headed our way with the Walking Dead Complete Fourth Season Limited Edition Blu-Ray, featuring a walker that really knows how to become one with nature.

During Season 4, Hershel and Carl stumble upon a poor sap that got split in half by a tree. Once upon a time ago the guy would have just died, but now he has to deal with being reanimated and stuck in one spot for all eternity as vines and moss transform him into some weird type of nature walker.

As is usual with the goodies created by McFarlane Toys, the level of detail is amazing, and (according to MTV News) the walker has a surprise in store for people interested in watching the Walking Dead – when you remove the Blu-rays from the folder, the walker’s arm and head reach towards you as if he’s ready to turn you into a snack, returning back to his original position only after the discs have been returned.

The Walking Dead Complete Fourth Season Limited Edition Blu-Ray will be available August 26 but it can be pre-ordered now for $116.99 at Amazon.

Doctor Who returned as a TV series in 2005, and three different incarnations of the Time Lord have had a lot of adventures since then, and Whovians can relive each and every one of them with the Doctor Who: The Complete Series 1-7 Limited Edition […]