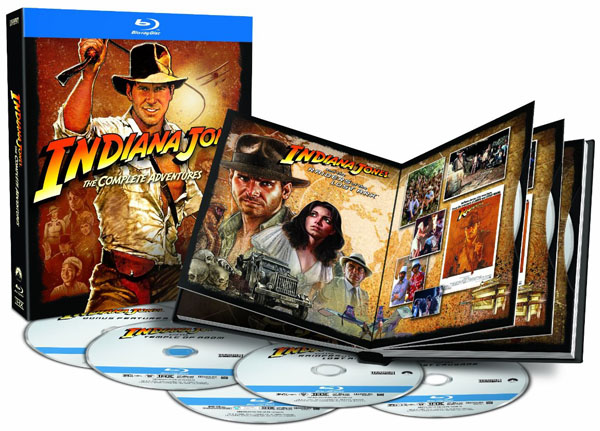 Watch Indy as he takes on the Nazis to save the Ark of the Covenant, avoids having his heart ripped out and saves a remote East Indian village, teams up with his dad (played by Sean Connery) to find the Holy Grail and solves the mystery of the Crystal Skull of Akator.

The set includes never before seen footage and 7 hours of special features including:

Raiders of the Lost Ark
Indiana Jones (Harrison Ford) is no ordinary archeologist. He is summoned from his ivy-covered environs by Marcus Brody (Denholm Elliott) to find the long-lost Ark of the Covenant. The Nazis, it seems, are already searching for the Ark, which the mystical-minded Hitler hopes to use to make his stormtroopers invincible. But to find the Ark, Indy must first secure a medallion kept under the protection of Indy’s old friend Abner Ravenwood, whose daughter, Marion (Karen Allen), evidently has a “history” with Jones. Whatever their personal differences, Indy and Marion become partners in one action-packed adventure after another, ranging from wandering the snake pits of the Well of Souls to surviving the pyrotechnic unearthing of the sacred Ark.

Temple of Doom
The second of the George Lucas/Steven Spielberg Indiana Jones epics is set a year or so before the events in Raiders of the Lost Ark (1984). After a brief brouhaha involving a precious vial and a wild ride down a raging Himalyan river, Indy (Harrison Ford) gets down to the problem at hand: retrieving a precious gem and several kidnapped young boys on behalf of a remote East Indian village.

Last Crusade
Once again, however, Mr. Jones is drawn away from his day job after an art collector (Julian Glover) approaches him with a proposition to find the much sought after Holy Grail. Circumstances reveal that there was another avid archeologist in search of the famed cup — Indiana Jones’ father, Dr. Henry Jones (Sean Connery) — who had recently disappeared during his efforts. The search for the grail is a dangerous quest, and its discovery may prove fatal to those who seek it for personal gain.

Indiana Jones meets Charlie Brown and the gang in the Peanuts Indiana Jones Art Print Set. Sadly, Snoopy only has a very minor role to play but there’s plenty of that big round-headed kid. The artist known as Raid 71 has created three fun prints […]

There are very few movies that are as classic as Raiders of the Lost Ark. It is an amazing experience every time I watch it. Even though I’ve seen it a million times. And now you can own the very first treasure that we saw […]

Remember the Death Star Home Theater from last month? The same website has a new article and slideshow about an amazing one in Indiana Jones style.

Is there anyone cooler than Harrison Ford as Indiana Jones? Probably not. Now you can be like Indy with the Indiana Jones Adult Hat and Whip Set.