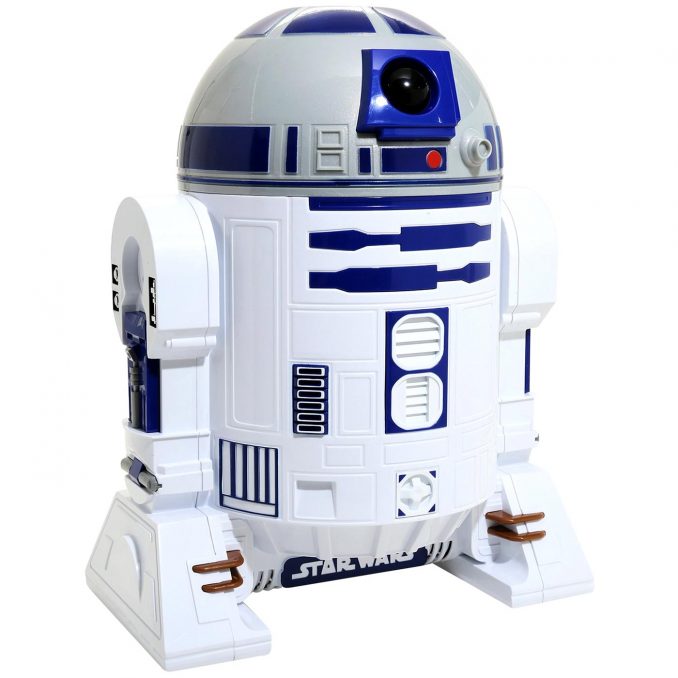 This Star Wars R2-D2 Deluxe Popcorn Maker isn’t the first R2-D2 popcorn maker we’ve seen, but compared to the previous ones, this really does appear to be the “deluxe” model.

First off, it really does look like R2-D2 and doesn’t appear to be any sort of appliance at all. However, you can pop off the head, which doubles as a lid and a popcorn bowl, and you are set to make a delicious snack.

It isn’t just accurate, detailed looks that make this deluxe either, as this R2 unit offers some pretty good stats for a popcorn maker. It features 1200 watts of power, a detachable canopy, and butter warmer.

Looks like R2 can add “popcorn maker” to his long list of gadgets and tools! Everyone’s favorite astromech droid has been reimagined as a deluxe popcorn maker that pops kernels using hot air instead of oil. R2’s head functions as both a lid and a popcorn bowl! Also features a detachable canopy and butter warmer.

Available at BoxLunch, this R2-D2 Deluxe Popcorn Maker is $99.90. That’s a bit steep since it isn’t on sale, however, right now (at the time of publication) you can use BoxLunch promo code BLGIFTS to save 20% off this item. Plus that code will save you 20% nearly everything else at the site.

Anybody want some popcorn as they watch their home planet being destroyed? That’s right, that’s no moon. It’s a popcorn maker from a galaxy far, far away. The Star Wars Death Star Hot Air Popcorn Maker will have you eating delicious popcorn in minutes…and hopefully […]

You may not have just won the Stanley Cup like the Washington Capitals, but you can still take home the coveted trophy with the NHL Stanley Cup Popcorn Maker. This replica of the Stanley Cup opens to reveal a popcorn maker that quickly air pops […]

The Star Wars R2-D2 Mini Popcorn Popper makes 6 cups of popped popcorn so you can enjoy a snack while watching the Star Wars movies. That’s a lot of movies so you need a snack. It features a BPA-free Tritan plastic container, with easy one-touch […]