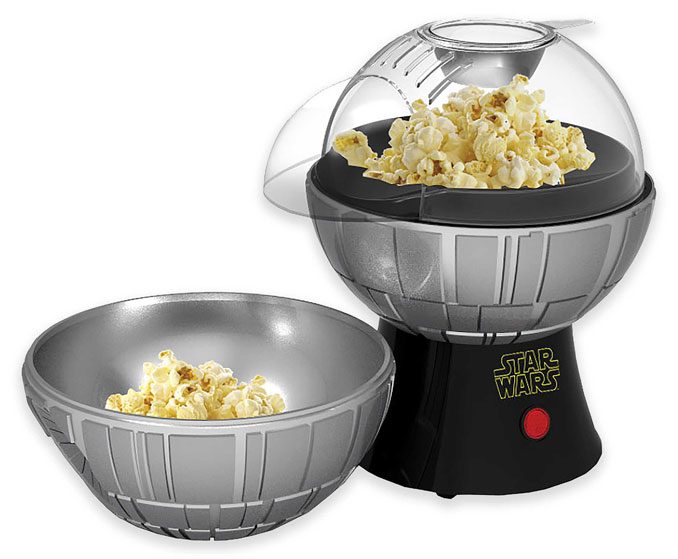 Anybody want some popcorn as they watch their home planet being destroyed? That’s right, that’s no moon. It’s a popcorn maker from a galaxy far, far away. The Star Wars Death Star Hot Air Popcorn Maker will have you eating delicious popcorn in minutes…and hopefully that’s all it does.

This officially licensed Death Star popcorn maker uses hot air instead of oil or butter to pop kernels (great for those of us counting calories) and the top half of the Death Star conveniently doubles as a fun serving bowl.

You can purchase the Star Wars Death Star Hot Air Popcorn Maker at Bed Bath & Beyond, Amazon.com and Walmart.com. If you find yourself a little intimidated by the Death Star popcorn maker, you could always go with the R2-D2 Popcorn Maker instead.

True story: When I saw this picture of the Buttered Popcorn – Air Freshener, I left my laptop for a moment to grab a handful of caramel-coated popcorn from the tub in the kitchen. So imagine just how much more popcorn you’ll be eating or […]

You just can’t escape the pinkness that is Hello Kitty items. However, we men have to live with it since the ladies love Hello Kitty. That’s why you have to get this Hello Kitty Popcorn Maker for your special girl. It’s popcorn and Hello Kitty […]

Make waffles the Imperial way with this awesome Star Wars Death Star Waffle Maker. This evil waffle maker produces a 7″ diameter round waffle with two sections that looks just like the Death Star. We have dreamed about Death Star Waffles for ages and now […]