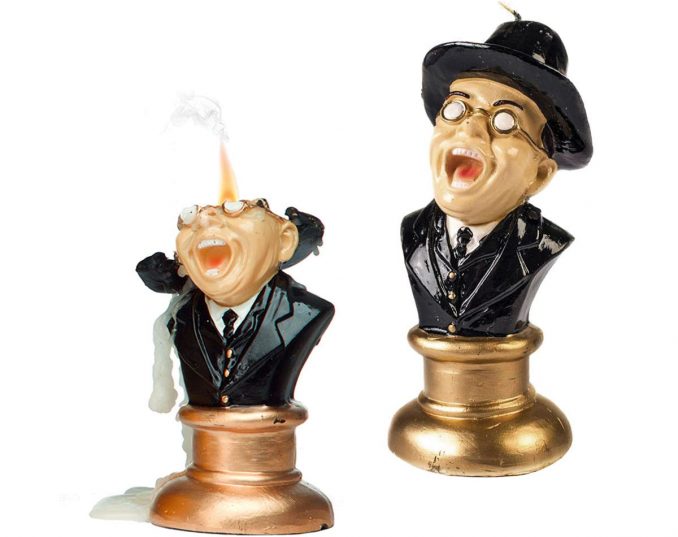 Looking for a candle to set a romantic mood? Well, the Raiders of the Lost Ark Melting Toht Candle probably isn’t what you want but it’s still a great find for those who enjoyed the gory end of Major Arnold Toht when the Ark of the Covenant was opened.

Don’t feel bad if you didn’t know Toht’s name because it wasn’t actually mentioned until the credits rolled by at the end. He was just the creepy evil Nazi guy, but he’s one of the most memorable characters in the movie.

The candle features a bust of Toht wearing his leather jacket, fedora, and glasses. His mouth is also gaping open to replicate the scene where he’s transformed into a puddle of goo.

If you’ve seen Raiders of the Lost Ark, there’s probably one scene that really sticks in the memory. No not that gigantic boulder tumbling after Indy, nor when he shoots that sword-twirling nutter in the market square, nor even when he has that uncomfortable staring contest with a cobra…

No, we’re talking about when ruthless Gestapo agent Toht gets his gory comeuppance at the end of the film – you know, when his eyes roll back like a couple of boiled eggs and he lets out a blood-curdling scream as his entire face dribbles off his skull. That bit. Just awesome. He did Nazi that coming.

Whether it left you with nightmares for weeks or just had you repeatedly hitting the re-wind button, celebrate the greatest death in all of cinema history with the Melting Toht Candle. Thankfully this detailed replica won’t melt quite as fast so you can really savour the moment.

The Zombie Melting Candle craves more than brains. He also has a strong desire for someone to blow his flame out before it’s too late. Candles have a reputation for creating romantic ambiance… but that probably doesn’t apply to this little guy. However, if you […]

Watch the ARK: Extinction Announcement Trailer to learn about the upcoming final chapter to the ARK: Survival Evolved open world survival video game. In the ARK Extinction expansion pack, you return to Earth to complete the ARK cycle, defeat gigantic Titans, and save the future. […]

We all need to have a little light in our lives and our homes, but chasing away the shadows doesn’t have to be boring. The Melting Lamp adds an artistic flair to lighting that will have others doing a double-take when they first see it. […]

Looking for a nice gift for that art lover in your family or just something cool to go on your shelf.  This Melting Shelf Clock pays homage to Salvador Dali and his great surrealist masterpiece, The Persistence of Memory.  It measures approximately 16 x 14.5 […]