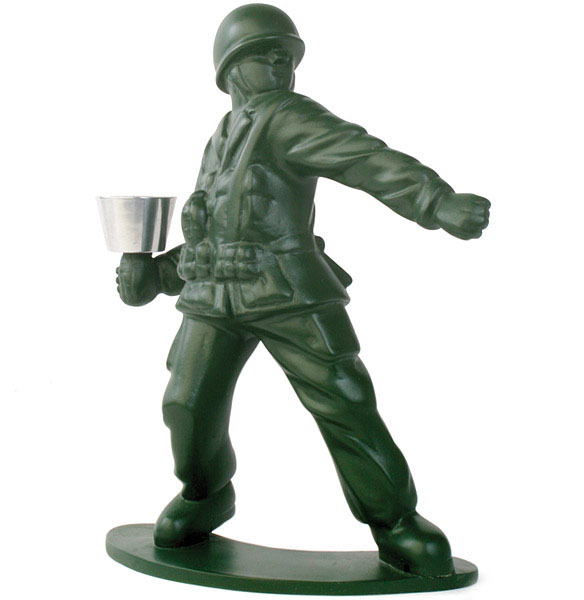 For the longest time, little green army men have been capturing the hearts of boys and men alike. Blame it on the hunting gene and being part of the violent human race, boys just seem to know what to do when they have access to ‘wonderfully colored plastic war toys.’ For all you army men fanatics out there, the Green Army Man Candle Holder lets you guys hang onto your childhood a little longer.

Moms, wives and girlfriends will love that this army guy can instigate romantic candlelit dinners. Thank you, man in a uniform! And unlike a bunch of green army men toys, you can rest assured that he won’t be found lying on the floor where he can inflict severe battle wounds to the soles of your feet.

This army guy is a very classic rendition of the guy who’s about to seriously hurl a grenade at you. As a candle holder, he might look more like a fierce Jedi with a light saber or knight with a sword. 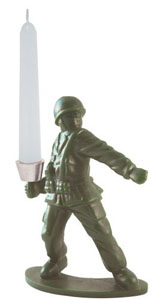 You grew up and so did your little plastic army men! This green soldier has a new lease on life – as a candle holder! A great gift for anyone who spent hours playing with army guys as a child, or a fun piece for the military fan. Made of cast resin and alloy, this candle holder looks spectacular with a white tapered candle or add an LED candle to make a safe decoration for a boy’s room.

The Green Army Man Candle Holder is $31.99 at Retro Planet and $26.95 at Amazon. It seems that they are in high demand, so order yours soon.

Meanwhile, give any boy a handful of Gummy Army Men and we guarantee it won’t be long before the “p-choo, p-choo, aieeee” sound effects manifest.

For all you chocolate lovers that can’t get enough of that sweet creamy taste, now you can enjoy scent of chocolate all day long.  The Hershey’s Syrup Chocolate Scented Candle provides over 100 hours of chocolate scented aromas that will drive everyone crazy, or out to […]

This NBX Jack Skellington Tombstone Votive Candle Holder is perfect for both Halloween and Christmas. Or anytime you want to celebrate the movie really. This detailed resin votive candle holder features Jack Skellington from The Nightmare Before Christmas, ready to provide some light into the […]

A Christmas Story is one of my favorite holiday movies. If you feel the same, but can’t afford a Leg Lamp, then check out this mini version, which is a candle holder. This Christmas Story Votive Candle Holder is made to look like a small […]

If you are a big fan of the whole brain in the jar thing, why not put the whole thing to candlelight with this Brain Candle? If you smell it burning, then it must be deep in thought. This hand-sculpted brain candle is suspended in […]