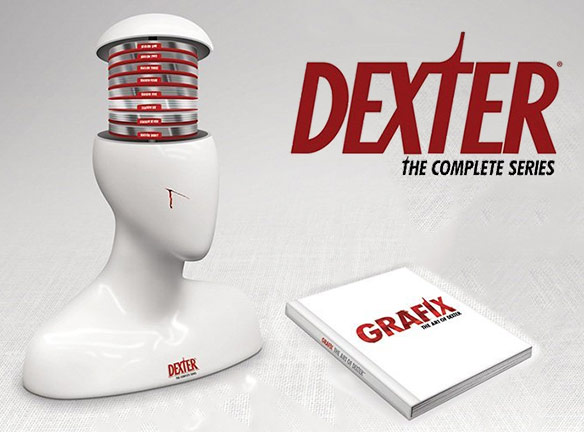 The TV series Dexter recently came to a close, so now you can own all the episodes with the Dexter: Complete Series Collection Blu-ray Set. There are actually two Complete Series Collection Blu-ray sets (as well as a DVD set). Both contain all 8 seasons of Dexter along with a bonus disc filled with over 3 hours of special features. They also some with an exclusive Grafix book featuring artwork and photography from 8 seasons of Dexter.

The difference between the two sets is the disc storage unit. The standard Blu-ray set (pictured below) has a “trophy” box where each disc looks like a blood slide. The Limited Edition Exclusive Collector’s version (pictured above) has a full scale bust that can open and close to access the discs. 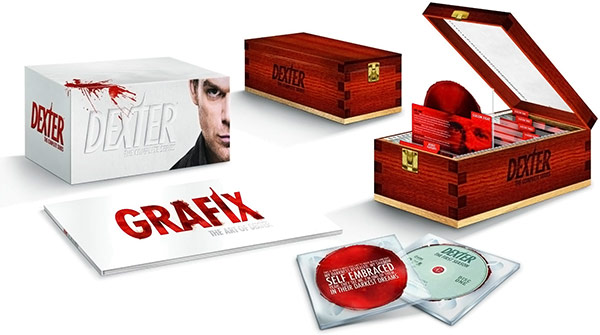 The Whole Body of Work…and more. All 8 seasons on Blu-ray, an exclusive Art of Dexter book and a killer bonus disc of new special features all wrapped up in one Limited Edition, collectible package. Join your favorite serial killer in all 8 chilling seasons of Showtime’s Emmy and Golden Globe-winning series. This to-die-for collection is a must-have for the Dark Passenger in us all. Blu-ray collection includes 25 discs, including all the episodes and the bonus disc.

Today only for Cyber Monday, Dexter: Complete Series Collection on Blu-ray is available for just $179.99 + Free Shipping at BestBuy.com. (Although still expensive, this is an $80 discount off their regular price and a whopping $280 off list price.) You can also shop at Amazon.com to buy the Blu-ray Set, Limited Edition Blu-ray Set, or DVD Set.