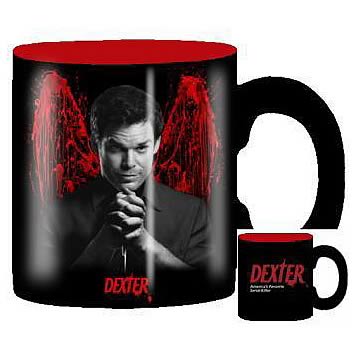 I don’t know about you all, but I’m counting down the days until the first “Dexter” show of the season on September 30. It’s perfect how the show lands at the tail-end of the weekend, just so you can be confused and baffled throughout the week, waiting like a vulture to get answers from the next show. Anyway, imagine having your very own Dexter Dark Passenger Mug filled with hot cocoa and a plate of cookies as you sit back and enjoy your Sunday nights this fall/winter.

The cliff-hanger from last season ended with Debra Morgan catching Dexter (her non-blood-related brother) red-handed just as she was about to confront him with her the pent-up love emotions that she’s had for him all along. As usual, Dex’s dark passenger is always landing him in big pile of doo-doo, isn’t it?

The Dark Passenger mug looks even more diabolical with Dexter donning bloody angel wings and his famous mischievous grin. It’s hard to tell from an upright perspective, but it looks like the inside of the mug is also painted blood-red.

We’ve shown you the Dexter Heat Changing Mug and a similar Color Changing Mug revealing Dexter’s image. Now get ready to add to your collection the Dexter Dark Passenger Mug, that’s available for pre-order for only $5.99 through Entertainment Earth. Delivery is expected to be in November.

I have always been a fan of Dexter ever since the show debuted. There’s just something so alluring about a blood stain analyst who also happens to be a serial killer on the side as well. It sounds bad put that way; but really once […]