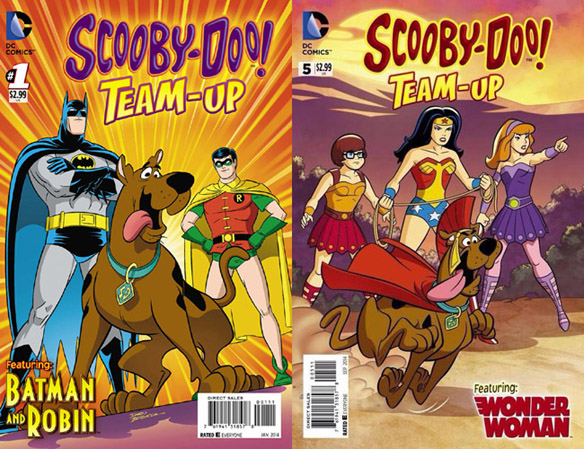 Scooby, Shaggy, and the rest of the gang take ghost-busting to a whole new level with the Scooby-Doo Superhero Team-Up Comic Books.

Way back in the old days (the 70s), Mystery Incorporated would occasionally rub elbows with some very famous people during investigations, ranging from the Harlem Globetrotters and Gomez Addams to the Dynamic Duo.

Today, DC Comics has brushed off that old idea and released a series of comic books that have Fred, Velma, Daphne, Shaggy, and Scooby-Doo teaming up with a variety of super-heroes. I guess the popularity of Batman and Robin guest-starring with Scooby is remembered these days because the majority of the current comics feature the Caped Crusader and the Boy Wonder, although things are shaken up a little bit later in the series by bringing in Teen Titans Go and Wonder Woman.

I think it’s especially interesting to see Scooby team-up with Bat-Hound in Scooby-Doo Team-Up #2, and Velma and Daphne taking part in Amazon training in Scooby-Doo #5 could also be fun. 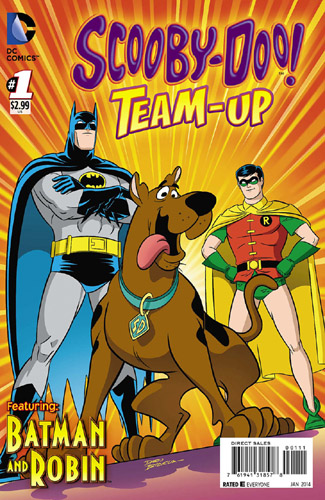 Rumors of a giant bat-creature bring Scooby and the gang on the run—but Batman and Robin are already on the trail of their old foe, the monstrous Man-Bat. Before long, the crooks behind a fake bat-creature will come face-to-face with the real thing…with the good guys caught in the middle! Don’t miss the start of this new, bimonthly miniseries! 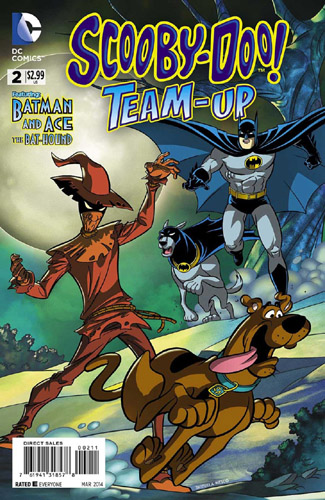 Holy overactive imagination! When Scarecrow attacks using his fear gas, only humans are affected, leaving Batman, Robin and the Mystery Inc. gang trapped facing “monsters” from their own imaginations. Now, it’s up to canine crusaders Scooby-Doo and Ace the Bat-Hound to save the day! 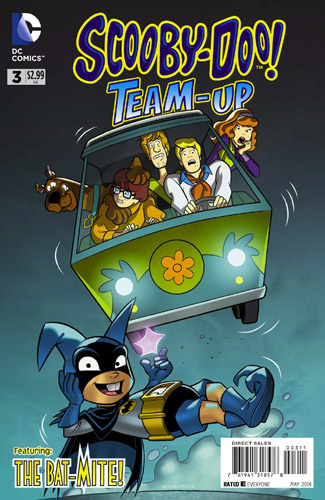 A magical imp is causing havoc in Gotham City, and the Dynamic Duo is looking for help from Scooby and the gang! But when Scooby gets his own “greatest fan” from the Fifth Dimension, can even Batman, Robin, and Mystery Inc. outwit two unpredictable imps to deal with the spooky, magical hijinks of…Scooby-Mite?! 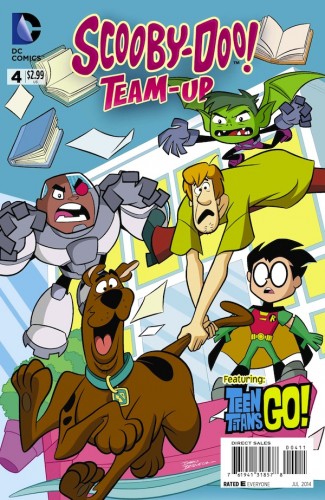 Is Titans Tower haunted?! Could there be more to the thumps in the night than a series of “ghostly” pranks by Beast Boy and Cyborg? Robin has called in some experts to solve the mystery – if Scooby, Shaggy, Cyborg, and Beast Boy ever stop chowing down on pizza and start looking for clues, that is! 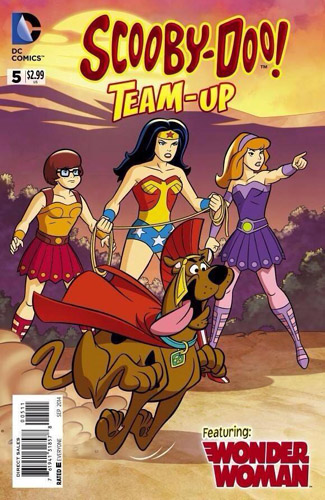 Wonder Woman’s homeland is under attack by mythological monsters that vanish into thin air before the Amazon warriors can fight back! Scooby, Wonder Woman and the gang must work together to solve this mystery…assuming Daphne and Velma complete their Amazon training in time!

The Scooby-Doo Superhero Team-Up Comic Books are available for $2.99 each at DC Comics…Click on the above titles for direct links to each comic.