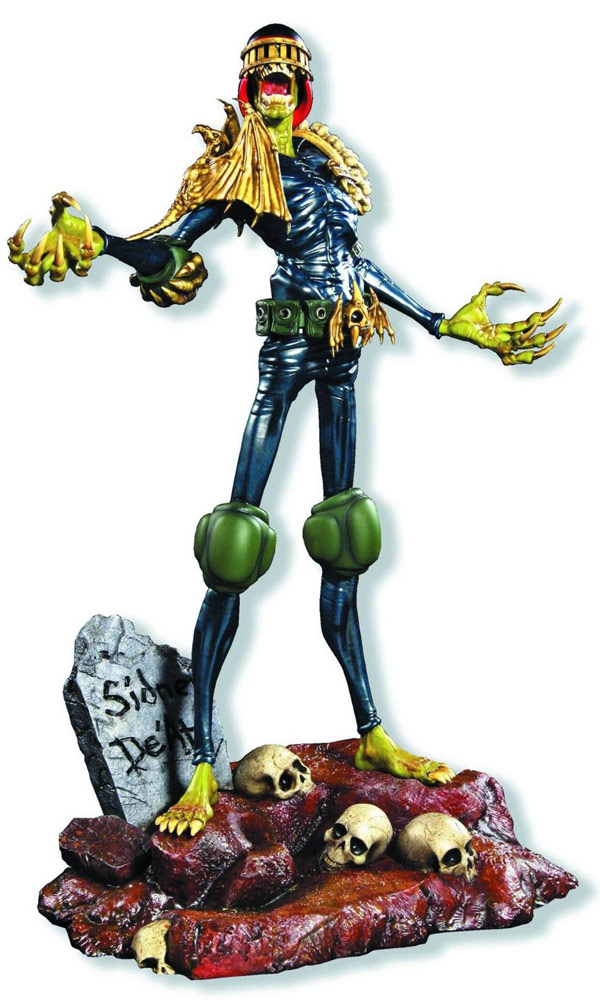 There aren’t a whole lot of people in Mega-City One that seem more intimidating than Judge Dredd but the 2000 AD Judge Death Statue reveals one character that even Dredd treats with a healthy dose of respect… which basically means Dredd shoots him with even more bullets than usual.

The 1:4 scale, 21-inch polystone statue features the gruesome character that has appeared in multiple stories, including 2000 AD. Whether you go for the origin that has Judge Death as an embodiment of death who views all life as a crime or the one that portrays the Dark Judge as an alternate-dimension incarnation of Dredd, the highly-detailed statue captures the essence of the character perfectly.

Mega-City One is vulnerable because the toughest cop of the future is chilling out with you on the Judge Dredd Lawmaster Statue. Batman might have a belt and cave filled with goodies but he’s not the only person who fights crime with an astounding arsenal […]

I am the law… in Antarctica! The Judge Dredd Cosplay Penguin will send a chill down your spine, but not because he’s scary; the little guy keeps cranking the AC down to sub-zero temps. Standing 4.5-inches-tall, this PVC statuette features a cosplaying penguin dressed as […]

Judge Dredd might be the Law but it’s hard to catch bad guys if you can’t get to them, which makes the Judge Dredd 1:12 Scale Lawmaster Motorcycle Vehicle just as important as Dredd’s very large gun. Saying the Lawmaster is just a motorcycle is […]

The 2000 AD Judge Dredd 1:12 Scale Action Figure is based on the work of John Wagner and Carlos Ezquerra. He is the toughest law-man of them all. Judge, jury, and executioner. This figure is in 1:12 scale and stands 6 1/4-inches tall. He comes […]

The Judge Dredd 1:12 Scale Action Figure is ready to declare himself the law, enforcing order and peace among your other collectibles. Standing 6.75-inches-tall and featuring over 30 points of articulation, this highly-detailed, digitally-sculpted figure delivers plenty of mega-goodness. In addition to a real cloth […]

Hello facial! This Hello Kitty Cherry Blossom Essence Face Pack gives you 35 Hello Kitty-shaped facial sheets so you can have some relaxing spa time Hello Kitty style. They have a light cherry blossom scent to help you relax and feel pampered. They nourish and […]