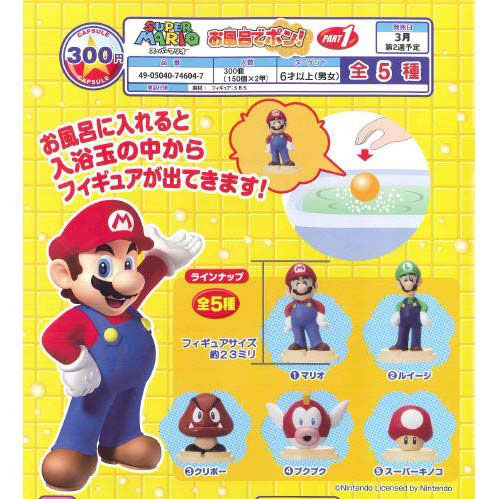 GeekAlerts has racked up a nice collection of fine luxury soaps, including Marbled Bacon Soap, “Hand” Soap, and NES Retro Controller Soap. Now we have Super Mario Bros. Bath Soap Balls imported from none other than the birthplace of Nintendo, Japan.

A ball of soap that dissolves to reveal one of 5 characters from Super Mario Brothers, the classic video game from Nintendo. Each ball of soap measures about 2″ (5 cm) in diameter, and dissolves into a miniature figure that is much smaller. Each figure includes a tiny base (outside the ball). As the figure is so small, this is not for children of young ages. Each bath soap comes packaged in a silver bag, with an included Japanese text insert.

You never know if you’re going to come face-to-face with a goomba to bite your bottom, a flying fish to smack you on the head, a mushroom to power-up, or one of the heroic Mario Bros. But one thing’s for sure, these surprise soap balls put the fizzle in the shizzle.

Conquer bathtime boredom with Super Mario Bros. Bath Soap Balls, available at Amazon for $6.29 or at GKWorld for $6.95.

The great thing about Super Mario Bros. is that the games are fun and engaging for both guys and gals. But it’s not like everyone wants to come out of the video game closet and profess their love of Mario to the world. For girls […]