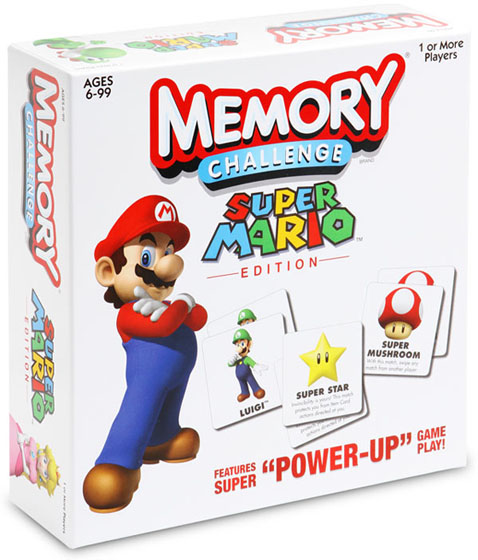 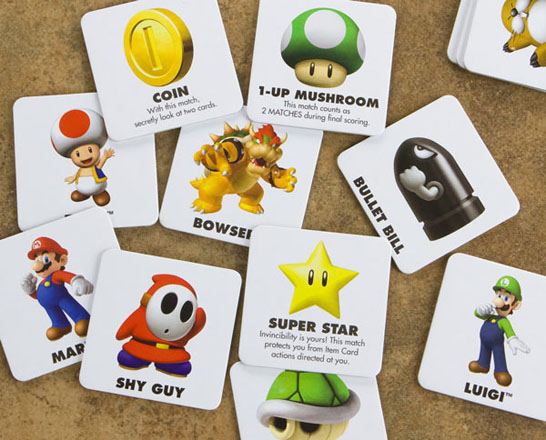 In my opinion, this game should’ve been the first board game to hit the market, because ever since the birth of Super Mario Bros. 3 on NES and all the other video games that followed on Nintendo’s consoles, some of the bonus rounds included a memory game. Whenever the most card mates were found, Mario would earn the power-ups shown on the respective matching cards. Basically, if the player has a good, visual memory he/she could hit the power-up jackpot. (Or if you had the pre-internet days cheat book, you could cheat your way into winning the jackpot.) A memory board game based on Mario and his cronies gel right in to the storyline.

Memory is one of the oldest games around, but combine that with Mario characters that you’re fond of and a simple game of Memory gets all the more intriguing. Then, with the 20 item cards included in Memory Challenge Super Mario, you get to relive some of the magic from the video game.

One of the item cards is the Super Star which gives you invincibility. If you’re trying to teach your six-year-old how to read and identify Mario characters, use this game as a reading tool. The item cards have bold lettering under the character’s picture, followed by a short instruction of what the player is supposed to do next.

The Memory Challenge Super Mario Game, which was launched in May, is available at Amazon.com for $14.95 and at ThinkGeek for $15.99. The game is intended for ages 6 and up.

While we’re on the subject, here’s a rare Mario game found on GeekAlerts: the Japan-Imported Super Mario Crystal Maze Game.

Test your memory in the geekiest way possible with this Marvel Comics Edition Memory Challenge Game. This is a great way to compete with the family and see who knows more about Marvel Comics Superheroes. This game features over 100 cards, including 50 pairs of […]