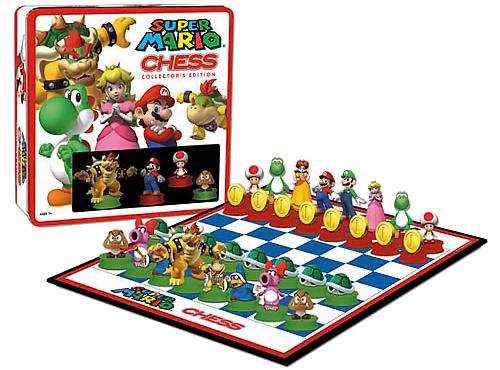 Chess is one of the best board games of all time. It involves critical thinking, concentration, and it brings out the cerebral warrior in every player. What if the world’s most famous plumber and his faithful sidekicks (and arch enemies) were to replace regular black-and-white chess game pieces? You’d get the Super Mario Chess: Collector’s Edition game.

Things get a whole lot more exciting when chess game pieces take on the appearance of your favorite video game characters. In Super Mario Chess, it’s a clear battle between good vs. evil. You’ve got Mario, Luigi, Princess Peach (2), Yoshi (2), Toad (2) and gold coins (8) honorably defending Mushroom Kingdom from collapse. Meanwhile, Bowser, Bowser Jr., Magickoopa (2), Birdo (2), Goomba (2), and Koopa Troopas (8) are all fixing to take down Mushroom Kingdom. If Bowser wins, that would mean that Princess Peach be forced to marry the nasty King of the Koopas. But if you look closely, Bowser would actually get two princesses for the price of one in this game, so the stakes are even higher. Did you also notice that Luigi is actually the queen? Hmm. 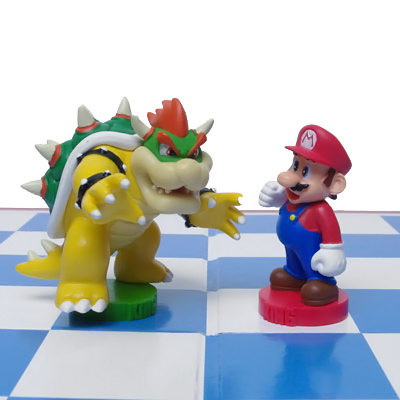 Even if you don’t play chess but love Mario, just having the 32 hand-painted game pieces is plenty of entertainment in itself. You could create your own games and adventures with the variety of characters available. For example, you could make the Mario team game pieces hop on the shelled Koopa Troopas to knock down Bowser and his cronies and collect coins, or you could orchestrate a fun game of bowling the bad guys with a shell. Also, if you can’t find Mario cake toppers at the store, then you could use these chess pieces to decorate a Super Mario-themed birthday cake. There are lots of reasons to have this game, but the fact that it’s a collector’s edition pretty much sums it up right there. 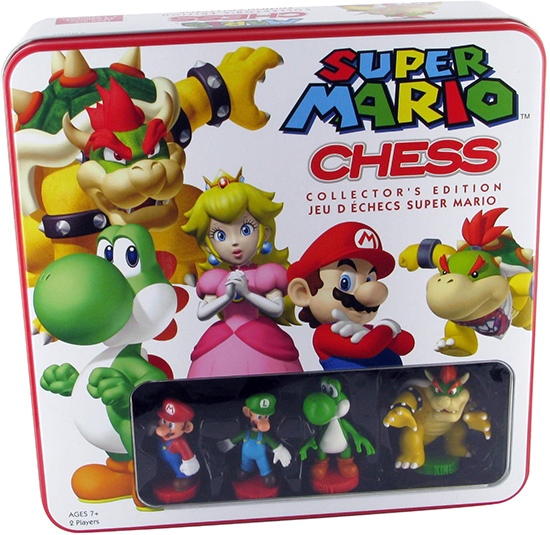 To get your hands on the Super Mario Chess: Collector’s Edition, you’ll have to go to Amazon.com. The price is $35.22, which qualifies it for Free Super Saver Shipping in the US. The game is also available at ThinkGeek.com and EntertainmentEarth.com for $39.99.

As you can see, we go cuckoo over all things Mario. What’s not to love about the coolest hero in a moustache since Magnum P.I.? So be sure to check out other Super Mario novelties on GeekAlerts, including the Super Mario Yahtzee Game,  Super Mario Crystal Maze Game, Mario Wall Graphics, Mario Singing Glow Star, Super Mario 3-Ds Gummy Candy, Super Mario Question Box Candy, Mario and Luigi Slippers, and Mario Hand Warmer Mousepad.

It’s been a long time since we saw the Mushroom LED Lamp, and it didn’t looks as stylized as this Super Mario Mushroom Light. Even if you aren’t a diehard Nintendo gamer, you will recognize this iconic figure. This officially licensed Super Mario product doesn’t […]

Emboss cookies, pies, fondant, and more with your favorite Nintendo characters using this Super Mario Embossing Rolling Pin. Just like the Legend of Zelda Rolling Pin, this rolling pin is molded with designs, so it automatically adds them to dough (or anything soft and pliable) […]