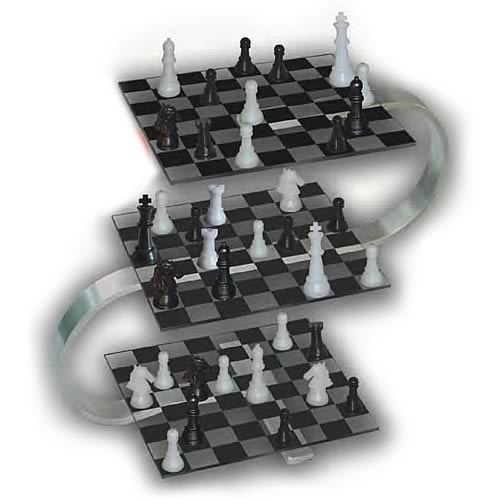 Chess is a complicated enough game as it is. But if you’re up for a challenge and are bored with how the classic game is usually played, then you can play it all again in three different levels with the Strato Chess Set Game. Of course, you can also mix things up by playing chess traditionally with the Wobble Chess Set or Doctor Who Lenticular Animated Chess Set. You can also play it in the not-so-traditional way with Solitaire Chess.

But the Strato Chess Set Game is definitely on a league of its own because you’ll be playing for your opponent’s king in three dimensions. Move up and down the three boards as the race towards “Check mate!” begins.

Take your game to the next level with this Strato Chess Set Game… literally! This 3-D chess game features lucite boards and a stainless steel framework. The pieces move up and down from board to board as well as traditonal chess moves. Complete with assembly diagram, 32 handsome, felted plastic chess pieces with a 2 1/2-inch king, it also includes instructions on how to play in the third dimension.

The Strato Chess Set Game is available for pre-order from Entertainment Earth for $34.99.

In the past we’ve reviewed quite a few products from True Utility, a company based in England that designs and manufactures high quality pocket tools. Now they sent GeekAlerts a whole range of new products, and we’re taking a hands-on look at one of them […]