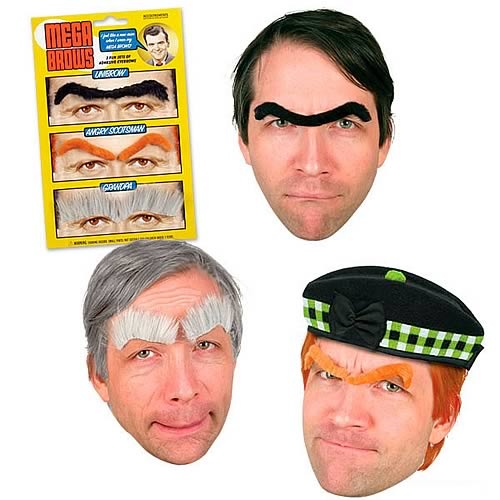 There’s this guy at my office that has a unibrow. He’s a nice guy, and he’s pretty popular at the office. But sometimes, I just can’t help but stare at his extremely thick and bushy unibrow. I’m not discriminating against unibrows at all; in fact, I’m pretty curious why some people have a whole lot more hair growing in between their eyebrows than others. But hey, if you’re born with some pretty sparse brows, then you might want to tack on some of the pretty funky brows from the Mega Brows 3-Pack.

The Mega Brows 3-Pack contains three different sets of eyebrows: the unibrow (my colleague’s looks just like the one in this pack, honest), the angry ginger-haired sportsman brow, and the grandpa brow. And in case you want to freak some people out, hold these Blinking Eyes up to your real peepers and you’re all set.

The Mega Brows 3-Pack is available for pre-order from Entertainment Earth for $7.99.

This Mega Man 10 Mega Man and Bosses Blue Tumbler is perfect for Mega Man fans. It features Mega Man himself along with all of the bosses from the game. If you’re a fan of the Mega Man video game series, this is the tumbler […]

If you love the old school Mega-Man games, you’ll love this Mega Man Running Mega Man 13-Inch Statue. It features an individually hand-numbered base and includes certificate of authenticity. This statue measures 16-inches tall and is a limited edition of 1,000 pieces. It is cast […]