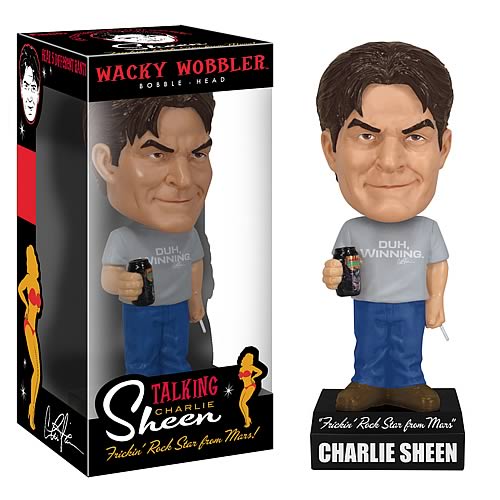 And you thought Chinese proverbs were hard to figure out! One thing’s for certain, Sheen wasn’t a happy camper with the cards his Hollywood employers dealt him. Though most actors given the same situation would’ve taken the high road, kept quiet and moved on, Sheen decided to vent his frustrations publicly and attempted to send his perpetrators to court. At least he had a huge virtual audience to see him through it all.

If you thoroughly enjoyed watching Sheen’s sanity unravel before your very eyes, you can get his Wacky Wobbler and replay his classic one-liners whenever you’re feeling blue. No need to scour the internet for footage.

For just $11.99, you can purchase the Charlie Sheen Talking Wacky Wobbler: the “Frickin’ Rock Star from Mars” at Entertainment Earth.

And since talking toys are so much fun to have, here are some other goodies to add to your collection: Star Wars Talking Plush Boba Fett and Jawa, Cursing Swear Bear and Talking Stewie from Family Guy.