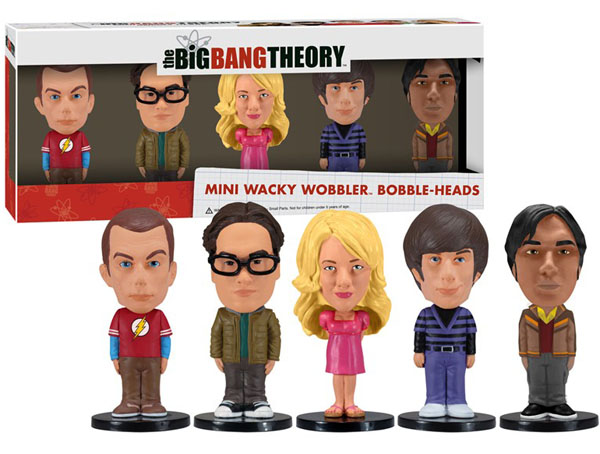 You probably have already seen the full-sized bobble heads of uber-geeks Sheldon and Howard on GeekAlerts, but now you’ll be thrilled to learn that you can pre-order the Big Bang Theory Mini Bobble Head Box Set, featuring all five of the most popular characters on the show.

Bazinga! Bring home the whole gang from The Big Bang Theory with these mini bobble heads! The set of 5 comes in a displayable window box and includes 3-inch tall bobble heads of Sheldon Cooper, Leonard Hofstadter, Penny, Howard Wolowitz, and Rajesh Koothrappali (Raj). Sheldon comes in his Flash T-shirt, brown pants, and shoes. Leonard is wearing a jacket, black pants, and black shoes. Penny is dressed in a pink dress and sandals, and Howard wears his highly fashionable purple-and-black striped shirt and purple pants. Raj arrives in a brown jacket over his maroon vest and gray pants. Aren’t they cute? Size: 3-inches tall

You don’t even have to be a fan of the show to imagine the wacky dynamics of four guys with no game and a hot blonde. Bring this fivesome along with you anywhere and create your own theatrics. You can line them up on your car’s dashboard, display them on your desk, let them hang out on your nightstand, etc. They’re only 3-inches tall, so they won’t take up much space or surface area. Geeks can be so sensible.

Pre-order your personal Big Bang Theory Mini Bobble Head Box Set from Entertainment Earth for $22.99 and expect it to ship in July and at Amazon.com for $29.99. In the UK, you can also pre-order the set for £ 26.99 from Forbidden Planet, where shipments are set to head out on September 30 this year.