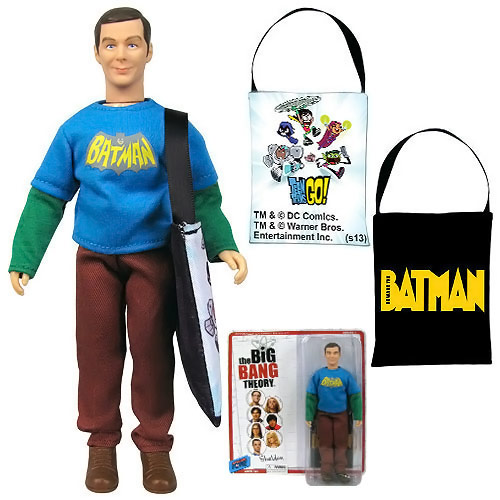 Uptight, socially inept Sheldon Cooper walks a tightrope between being entertaining and being irritating but he always manages to remain brilliantly clueless, and his charm has phasers set to stun with this retro-style action figure that’s reminiscent of the Mego action figures from the 70’s and 80’s. Is Sheldon cool enough to recognize the stylishness of going retro?

The figure, which kicks off Bif Bang Pow’s Big Bang Theory line of action figures, features an 8-inch-tall Sheldon wearing real fabric clothing that includes a vintage Batman t-shirt, and a limited-edition San Diego Comic-Con bag that features the Teen Titans on one side and Batman on the other.

When it comes to taking Sheldon home with you, your best bet is to venture forth and mingle with the crowd at San Diego Comic-Con 2013, which runs from Thursday, July 18, through Sunday, July 21, because this item will be sold for the first time there.

However, if there are any left after SDCC 2013, you’ll be able get the San Diego Comic-Con Exclusive Big Bang Theory Sheldon 8-Inch Action Figure for $24.99 at Entertainment Earth.