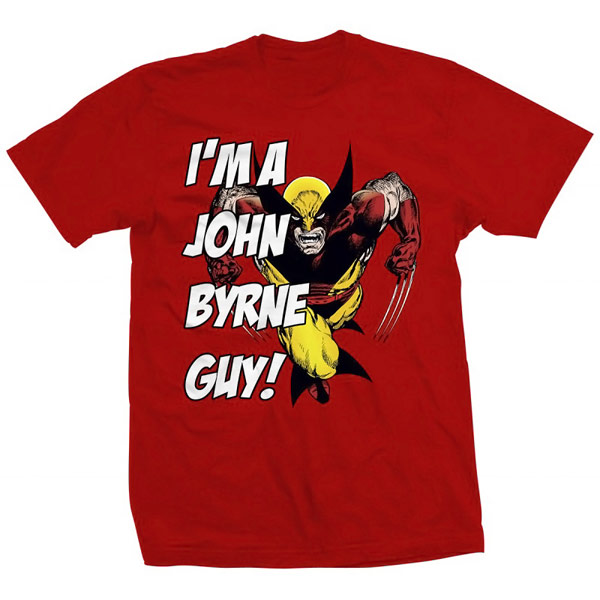 It seems like the characters in comic books are the ones that always get the attention so it’s nice to see the I’m a John Byrne Guy T-Shirt arrive on the scene because comic book artists and writers deserve a little love too, especially when they’ve had such a huge impact on the comic book industry.

Fans of John Byrne’s style will love this shirt. Fan of Wolverine will love this shirt. Even wrestling fans will find a special place in their closet for this addition to their wardrobe. Why will fans of wrestling covet this particular shirt? Because it was designed by Total Nonstop Action Wrestling’s Christopher Daniels AKA Curry Man AKA Fallen Angel.

Now that the wrestling connection has been revealed, maybe your mind is now pondering why the X-Men’s Wolverine was chosen as the subject, aside from the fact that he’s probably the most popular, well-known member of the Marvel mutant team. And that is exactly why he makes the perfect character for this shirt. Way back in the early days of Wolverine’s existence, Marvel didn’t see a reason to keep the rough-around-the-edges Canadian mutant around but Byrne insisted that Wolverine stay and even wrote a few stories to help keep him relevant.

You can show your appreciation for the man who saved Wolverine with the I’m a John Byrne Guy T-Shirt for $19.99 at Pro Wrestling Tees.

Get ready for thumb wrestling from a galaxy far far away. As always, it’s light against dark, but your thumbs are the Jedi and the Sith. Star Wars Lightsaber Thumb Wrestling takes thumb wrestling to a whole new level. Step into the arena and fight […]

Thumb wrestling is an essential part of childhood, so why not make it more like a professional sport. Give it some screaming fans, some bright lights and an arena. Well, the arena is taken care of at least, thanks to the Pro Thumb Wrestling Arena.

Wolverine usually has a rough time when he visits Japan and this time is no different on the Wolverine Swords T-Shirt, which features the comic book version of the adamantium-boned mutant doing his best pin cushion impression. A costumed Logan kneels in front of the […]