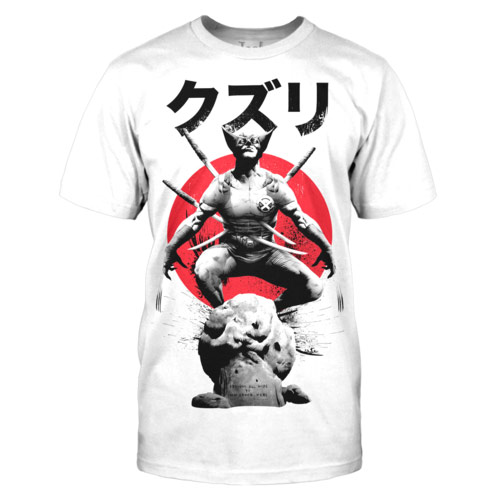 Wolverine usually has a rough time when he visits Japan and this time is no different on the Wolverine Swords T-Shirt, which features the comic book version of the adamantium-boned mutant doing his best pin cushion impression.

A costumed Logan kneels in front of the familiar ‘Rising Sun’ symbol on this white t-shirt, with three samurai swords running completely through him. His razor-sharp claws are extended and ready to put a world of hurt on people after his healing factor kicks in to handle the fatal-for-anyone-else wounds. The Japanese text over the image translates into Wolverine.

If you enjoy Wolverine, the X-Men, or just get a kick out of seeing people poked with swords, you can get the Wolverine Swords T-Shirt for $25 at Jack of all Trades Clothing.

Four classic comic book characters join forces to fight evil on the Swords of Sorrow Metal Poster. Red Sonja, Dejah Thoris, Vampirella, and Jungle Girl are ready to wield the Swords of Sorrow to stop an evil menace, and artist/photographer Andrew Dobell, with the help […]

Sometimes you find yourself without a weapon when an orc or a goblin attacks. Well that won’t happen with these Giant Lollipop Swords. Whenever you have your lollipop you will also be armed. Granted, they are more sticky than sharp, but at least it is […]

So you’re a fan of the Wolverine, who isn’t? He hardly ages, he’s self-healing, full of muscles, kick’s serious butt, usually gets the girl, looks cool on a Harley, and am I forgetting something? Oh yeah, and he has awesome hair! Well just about all […]