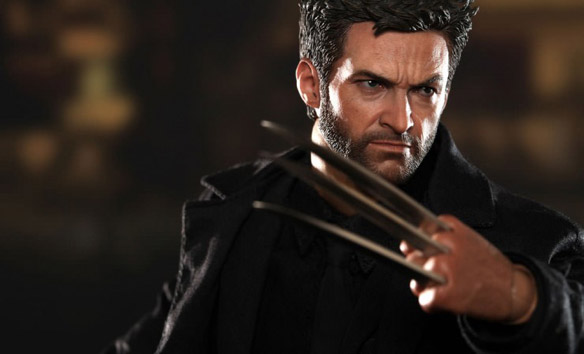 Hey bub, what are you waiting for? The Wolverine Sixth Scale Figure lets you bring home everybody’s favorite X-Man, who happens to look a lot like Hugh Jackman.

Everybody’s crazy about a sharp-dressed mutant, and Wolvie is looking pretty sharp in his all-black ensemble, but he can get down-and-dirty too, sporting a much more casual look with a ‘wifebeater’.

The sixth-scale figure, based on Logan in the movie, The Wolverine, features a specially crafted, movie-accurate head sculpt based on Hugh Jackman, a set of bone claws, a set of adamantium-covered claws, an engraved metal Japanese sword, and two outfits.

The Wolverine Sixth Scale Figure will be available May 2014 but it can be pre-ordered now for $224.99 (or for as little as $75.00/month) at Sideshow Collectibles.

Listen up, Bub, because it’s claw-popping time with the Wolverine Sixth-Scale Figure, based on everyone’s favorite mutant berserker. Long before Hugh Jackman became the face of Logan, the mutant known as Wolverine was dishing out some serious hurt to anyone who got between him and […]