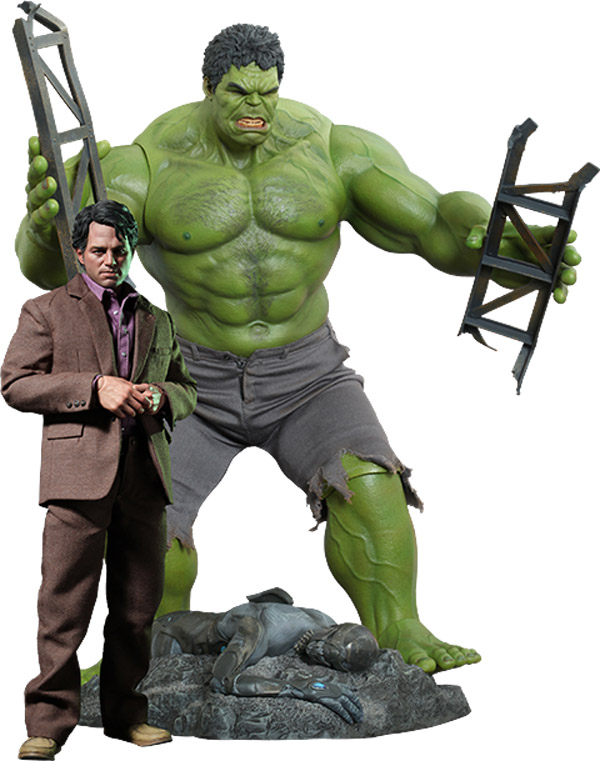 Bruce Banner and the Hulk are a great example of an inseparable team, mainly because they’re the same person, so it only makes sense to keep the duo together for the Bruce Banner and Hulk Sixth Scale Figure Set.

The 12-inch-tall Banner figure features a detailed likeness of Mark Ruffalo with a movie-accurate facial expression, detailed wrinkles, and skin texture. Eight interchangeable palms are also included that allow the figure to do a variety of actions, from holding his glasses to holding a Chitauri scepter.

The 16.5-inch-tall Hulk figure features a detailed likeness of the gamma-irradiated beast from The Avengers with two pairs of interchangeable hands.

The Bruce Banner and Hulk Sixth Scale Figure Set won’t be available until September 24, 2014, but there’s no need to get angry about it because you can pre-order now for $509.99 (or for as little as $57.37/month) at Sideshow Collectibles.

The rage! The facial expressions!! The rolling eyes!!! And that HAIR!!!! There’s a lot to like with the Hulk Deluxe Sixth-Scale Figure Collectible Set. Okay, first things first because I have to get it out my system. That hair! I don’t know if it’s the […]