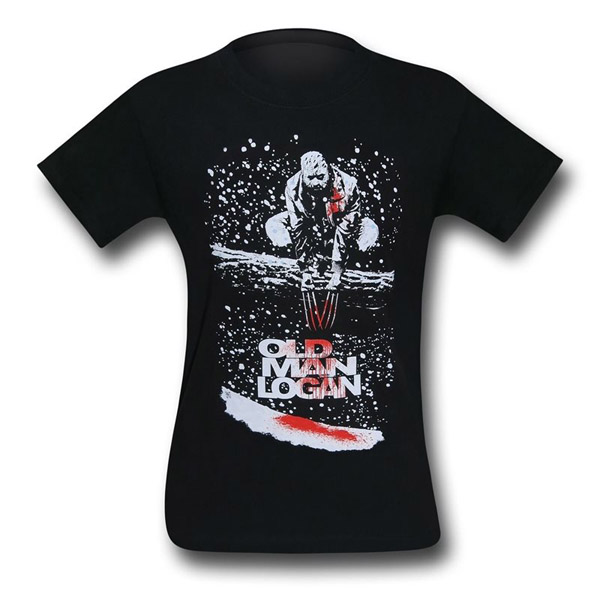 Wolverine gets old and gray with the Wolverine Old Man Logan #5 Cover T-Shirt but the extended claws and blood proves he’s still not someone you want to mess with.

In a desolate future wasteland ruled by the villains of the Marvel Universe, Old Man Logan, the mutant once known as Wolverine, fights to bring back a little law to the lawless. And then he’s transported to an alternate past.

Featuring the cover art for Old Man Logan #5, this is a great shirt to wear when Hugh Jackman brings Old Man Logan to life on the big screen.

This Wolverine Old Man Logan One:12 Collective Action Figure depicts an alternate future Earth-807128 Wolverine who has aged. Old Man Logan is still no one to be trifled with however. This figure features over 30 points of articulation and incredible costume detailing that brings to […]

Logan Into the Sunset T-Shirt

Wolverine and X-23 get the ending they deserve on the Logan Into the Sunset T-Shirt. Okay, the movie Logan ended the way it needed to, the only way it really could have since Hugh Jackman said he was hanging up his adamantium claws… but isn’t […]

The past and future Wolverines bare their claws on the Logan The Final Act Art Print. Logan and Laura. Wolverine and X-23. The former X-Man and his young clone don’t get a chance to spend much time together but the two are an awesome fighting […]

Listen up, Bub, because it’s claw-popping time with the Wolverine Sixth-Scale Figure, based on everyone’s favorite mutant berserker. Long before Hugh Jackman became the face of Logan, the mutant known as Wolverine was dishing out some serious hurt to anyone who got between him and […]

Give your phone a little adamantium action with the Logan X-23 iPhone Case. You’ll be stylin’ like a Wolverine with this slim-fitting one-piece clip-on case that features Dafne Keen’s Laura/X-23 from the movie, Logan. Wearing her rainbow shirt and oh-so-cool shades, a claw-baring, blood-splattered Laura […]