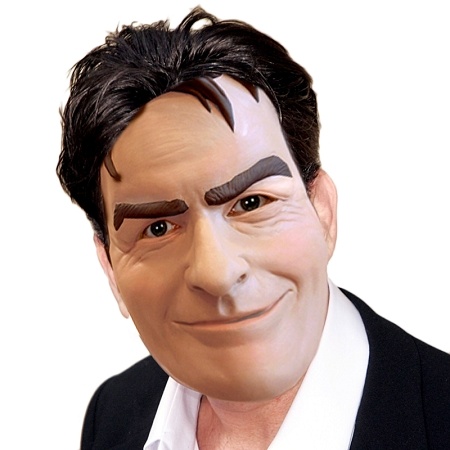 Charlie Sheen has had a pretty rough year, with his problems (although he doesn’t see it as such) being constantly publicized and his getting fired from the hit comedy, “Two and a Half Men.” But despite all that, I give Charlie props for being a good actor while he was still on the show and remain a fan, albeit a weary one at that. If you’d somehow like to channel his hot mess (and I mean that in more ways than one), then you can pick up the Charlie Sheen Mask.

The Charlie Sheen Mask bears the actor’s face with his signature smirk. Just bring along a bottle or two of the Tiger Blood Winning Energy Drink and you’re almost guaranteed a fun (and hopefully clean) night out on the town.

Get ready for one wild ride into a world few men have ventured. When you place this Charlie Sheen Mask upon your face all things transform into something fantastically adventurous. You are a warrior of light, fighting against the trolls and drugs of the underworld to become the greatest hero in the world of pathetic humans. Charlie has proven to be one of the worlds most under appreciated and misunderstood superpowers of all time. He is a magical being with hair that slams all things seemingly perfect in nature. Rely only on your natural wit and intelligence, utilizing boundless powers with the snap of a crazy eye.

The Charlie Sheen Mask is available from Stupid.com for $20.99.

The Peanuts gang found the Book of the Dead, and the Evil Dead Charlie Brown T-Shirt reveals that life went to Heck in a handbasket after that. Made of 100% cotton, this tee delivers some cool Peanuts and Evil Dead goodness, with Lucy, Linus, Peppermint […]

Fans of the epic action fantasy movie Sucker Punch are going to want to get their hands on the Sucker Punch Deluxe Adult Zombie Gas Mask. This mask is perfect for Halloween parties or for your private collection of movie collectibles. If your imagination is […]

Sloth from the Goonies Mask

Two crazes collide when the Horse Head mask combines with undead zombie goodness for the Zombie Horse Mask… that’s made even cooler because it glows in the dark. What happens when a horse gets chomped on by a zombie? Even more important, what happens when […]