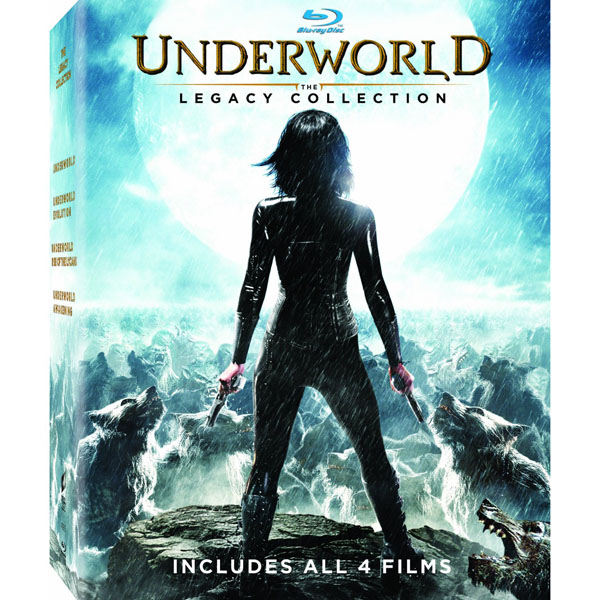 Sure, there are no zombies, but there are werewolves, vampires and a lot of Kate Beckinsale in tight leather. Watch as the Vampire and Lycan clans battle it out in all four movies in the Underworld: The Legacy Collection on Blu-ray.

The set includes: Underworld, Underworld: Evolution, Underworld: Rise of the Lycans and Underworld: Awakening. If you’re a fan of the movies, then you know the storyline from movie to movie jumps around a bit; but the action is always great, and did I mention Kate Beckinsale 🙂

Underworld
Underneath the city streets, amid the labyrinth of subway tunnels and gothic ruins, the two most notorious creatures of the night are embroiled in an all-out war that has been going on for centuries. It is the culmination of a blood-thirsty battle between the vampires and their mortal enemies, the werewolves. Stars: Kate Beckinsale, Scott Speedman.

Underworld: Evolution
The saga continues as the battle rages on between the death dealers (vampires) & the lycans (werewolves) in this fast-paced modern-day tale of deadly action ruthless intrigue & forbidden love all leading to the battle to end all wars as the immortals finally face their retribution.

Underworld: Rise of the Lycans
Underworld: Rise of the Lycans delves into the origins of the centuries-old blood feud between the aristocratic vampires, known as Death Dealers, and the barbaric Lycans (werewolves). A young Lycan, Lucian (Michael Sheen), emerges as a powerful leader who rallies the werewolves to rise up against Viktor (Bill Nighy), the cruel vampire king who has persecuted them for hundreds of years. Lucian is joined by his secret lover, the beautiful vampire Sonja (Rhona Mitra), in his battle to free the Lycans from their brutal enslavement.

Underworld: Awakening
Ultimate Vampire Warrioress Selene (Kate Beckinsale) escapes imprisonment to find herself in a world where humans have discovered the existence of both Vampire and Lycan clans, and are conducting an all-out war to eradicate both immortal species.

Right now you can buy the Blu-ray four disc version of Underworld: The Legacy Collection at Amazon.com on sale (41% off) for only $44.96 and it ships for FREE with Super Saver Shipping.

There has been an awakening. Have you felt it? You will when you’re wearing the Star Wars Awakening T-Shirt. The movie trailer for Star Wars: The Force Awakens brought back many feels for fans who have been anxiously awaiting a return to the galaxy far, […]

True Blood fans will want to take a bite out of this book. The True Blood Field Guide To Vampires is from the perspective of vamp-hating Steve Newlin. Steve records everything he knows about these ‘Creatures of Satan.’ Of course Steve’s journal was stolen by […]