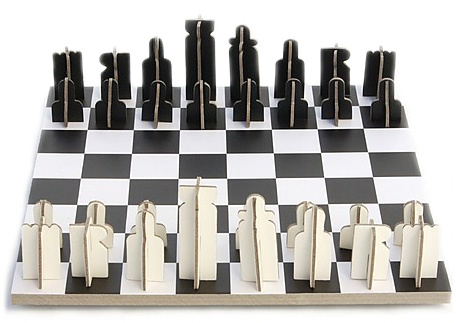 Seeing all these cool chess sets lately have made me wish that I were better at the board game to actually warrant the purchase of a set to call my own. Harry Potter fans probably found their match with the Harry Potter Sorcerer’s Stone Final Challenge Chess Set, while the more casual crew might find the Chalk Chess Set more amusing and useful. For DIY fanatics who want to build their own chess set the easy way, then they can do so with the DIY Chess Set. 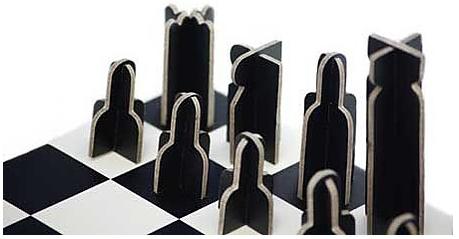 It’s easy with the DIY Chess Set because there’s no woodworking, sawing, or carving involved here. Instead, you get several sheets of cardboard with pre-cut pieces that you’re supposed to pop out and put together to form your bishops, queens, knights, pawns, and kings.

They say that learning to play chess is a great way to develop the intellect. And it’s more than just a pastime; it’s also considered an art, a science, and an intellectual sport.

Well, now chess has also become a nice DIY craft kit that will stimulate your creativity. You’ll have to assemble all 16 pieces and the chessboard before you start playing. It’s very easy, but you’ll have to exercise a bit of patience to put each of the pieces that make up this classic board game together: the pawns, the queen, the bishops, the king…

The DIY Chess Set is available from Curiosite for $35.68.

This DIY Nixie Tube Chess Set is the perfect DIY project for a chess geek. You can turn 32 Nixie tubes into chess pieces and then play chess with them. These chess pieces light up via induction and this set will look great in your […]

Chess is cool and there are tons of variations out there that use different characters for the chess pieces, but I think the Little Fat Cthulhu Custom Chess Set is the first one that takes the tentacled Ancient One and makes him look cute. The […]