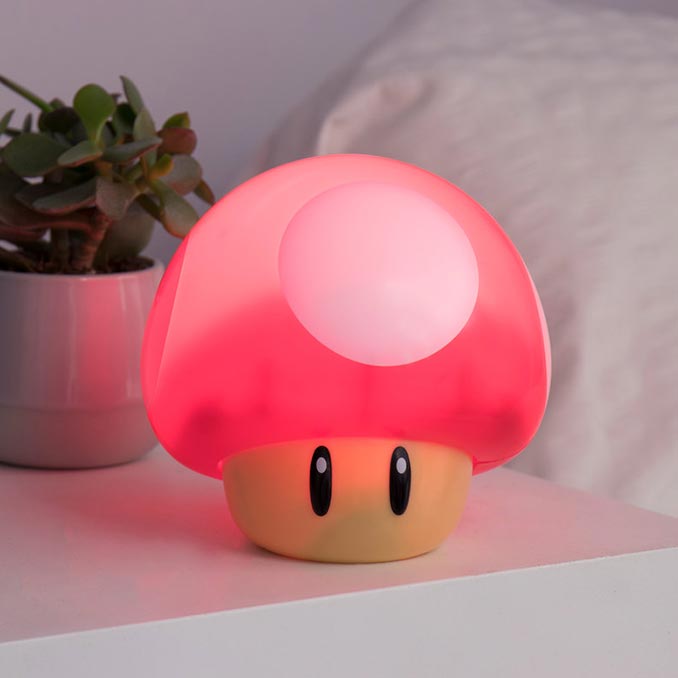 It’s been a long time since we saw the Mushroom LED Lamp, and it didn’t looks as stylized as this Super Mario Mushroom Light. Even if you aren’t a diehard Nintendo gamer, you will recognize this iconic figure. This officially licensed Super Mario product doesn’t just have the looks, it also has the sound. That’s right, when you turn on this Super Mushroom light, it plays the classic 8-bit ‘mushroom power up’ sound effect. 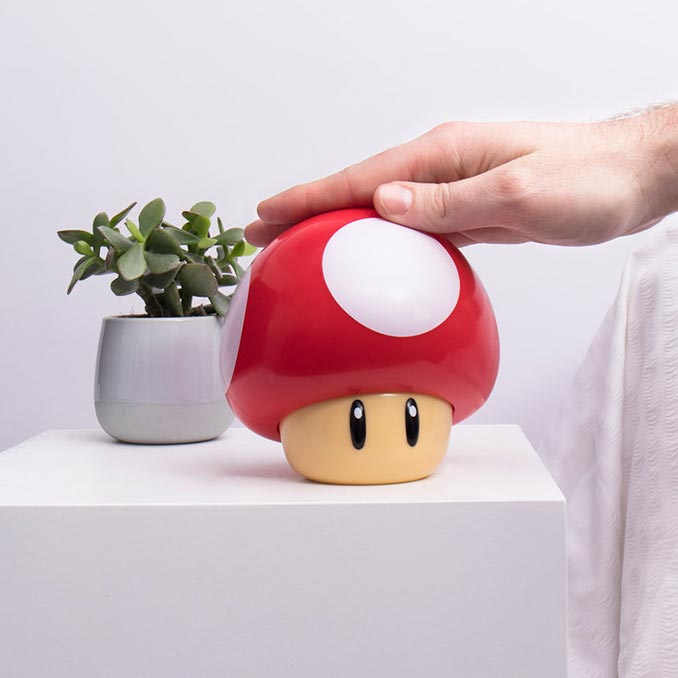 Level-up and illuminate your desk or shelves with this super-cute Super Mario Mushroom Light. This instantly recognizable Mushroom design makes a great gift for lovers of the Super Mario franchise as well as fans of retro gaming in general.

As you switch on the Mushroom Light it makes the officially licensed ‘Level-Up’ sound and glows with its trademark happy eyes.  Shigeru Miyamoto, the creator of Mario, says the inspiration behind the Super Mushroom was the concept of mushrooms being associated with magical worlds, making the Mushroom Light ideal to see you into the land of nod or set a magical ambiance, at any time.

Remember the Super Mario Mushroom Keyrings from the beginning of this week? The same artist that created those, Sally Faye, also made these Nintendo Super Mario Beaded Mushroom Sterling Silver Earrings. If you’re a geeky gamer girl, you can show off your retro style and […]

These cool Super Mario Bros. 1UP mushrooms comes filled with candy. You can choose between three different colors, each with a different flavor: raspberry (blue), cherry (red), or apple (green). The Super Mario Brothers Mushroom Candy tins are approximately 3.5 inches high and available for […]

Are you a mushroom lover? If so, you’re going to love this DIY Home Mushroom Growing Kit. So simple even your oblivious sibling could manage it. All you need to do is open the box, spray it down, and place it in a window sill. […]

If you take a gander at this USB Mushroom Lamp, you’ll see that it looks just like the Mushroom LED Lamp posted about here on GeekAlerts almost 4 years ago. So what makes this new model any different? One 3 letter initialism: USB. The old […]

We once showed you a Super Mario-like LED mushroom lamp that hooks up to your USB port, and now we’ve located another set of illuminating mushrooms in the Kinoko Mushroom USB Lamp. This mushroom lamp is more like a mini mushroom farm. The three big shrooms look […]

Its-a me, Mario! Got a lot of stuff to carry around? This Nintendo Mario Mushroom Reversible Backpack will help. It’s like getting two backpacks in one for Mario fans. It has the black background with 1-Up Mushroom on one side and power-ups and Mario on […]

This Super Mario Retro Mushroom 14in Plush is the iconic Super Mushroom that you remember, but as a huggable plush. It might just take you from small to super. No worries, you can set it down and it won’t go sliding off the screen. We […]