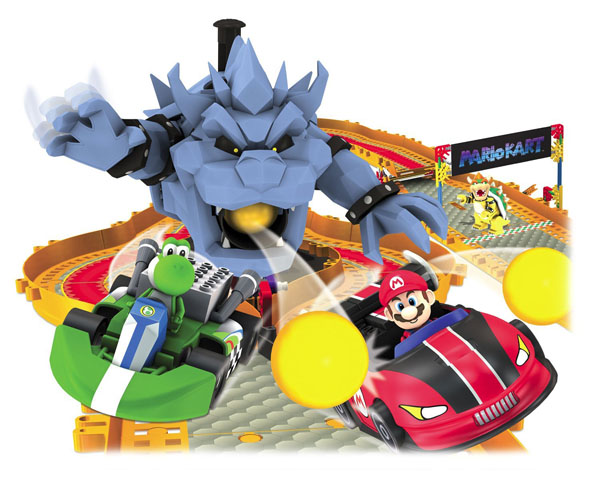 Mario and his comrades are always up against a posse of evil forces spawned from Bowser, and what’s worse is that they’re always racing against the clock of death. The K’Nex Mario & Yoshi vs. Stone Bowser Building Set lets your relive the action of Mario Kart video games for the Wii, but in real time. 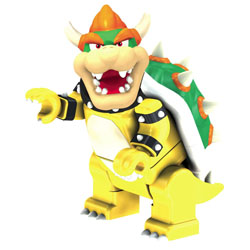 With the pull of a hand crank, Stone Bowser can launch plastic yellow fireballs at Mario and Yoshi as they zoom around the racetrack at battery-powered speeds. And does Bowser ever look stone cold doing that! The set also comes with a normal Bowser figure, along with a Bullet Bill and Turtle Shell to gang up on Mario and Yoshi. But don’t forget there’s a star to boost the team with short bursts of invincibility. 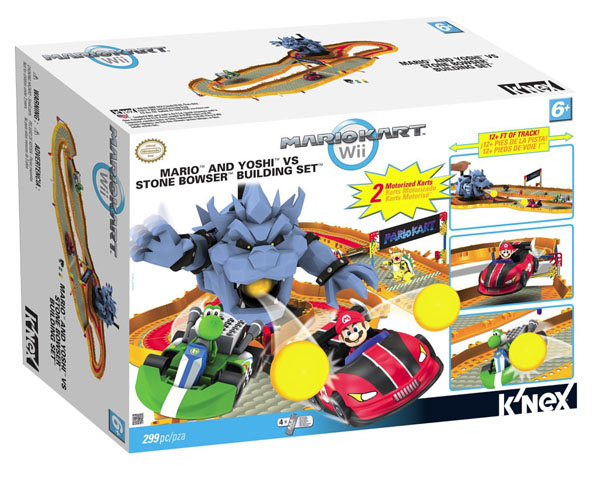 This set is compatible and expandable with the various K’Nex Mario Kart Wii building sets we’ve showcased, including the Mario vs. Goombas Building Set and Mario and Luigi Starting Line Building Set.

The K’Nex Mario & Yoshi vs. Stone Bowser Building Set can be found at Amazon starting at $51.13.

Remember that K’Nex Mario and Luigi Starting Line race set? Well you can make the race even crazier by adding on this Mario Kart Wii: Mario vs The Goombas Building Set. You get to build Mario in his battery-powered Kart along with a moving Goombas […]

This awesome Nintendo Bowser Jacket will have you reminiscing about all those great battles against Nintendo’s Bowser. The high quality jacket is limited edition with only 1,000 being made and each jacket includes a limited edition label of authenticity sewn to the liner at the […]

Forget those generic power toys; let your little ones take on ride on the Motorized Ride On Mario Kart. This real-life Mario kart supports kids up to 55 pounds, allowing the rider to experience a little of the Mario Kart fun we grew up with. […]

GeekAlerts has shown you cool K’Nex before with the K’NEX Mario Kart Wii Building Set, but here’s a different track for fans to experience Mario Kart on. The K’Nex Mario and Luigi Starting Line will allow you to build your karts, piece the track together and […]

Digital Inflatable Sports Kart for 3DS and Wii with Pump

Ah the many accessories that you can buy for the Wii. The latest is this Digital Inflatable Sports Kart for 3DS and Wii with Pump. A steering wheel attached to an actual kart for both the Wii and the Nintendo 3DS will come in very […]

Bring the thrill of the race from the screen to real life with this Super Mario Mario Kart Wii Die-Cast Vehicle 5-Pack. This set will be hours of fun for your kids. You get 5 Mario Kart Wii video game characters: 1 die-cast kart of […]