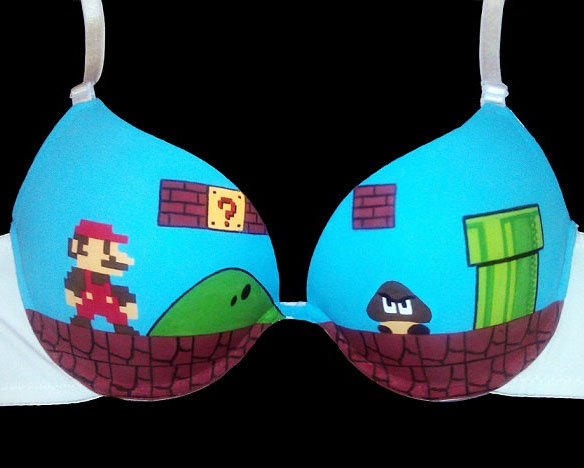 The great thing about Super Mario Bros. is that the games are fun and engaging for both guys and gals. But it’s not like everyone wants to come out of the video game closet and profess their love of Mario to the world. For girls who like to keep their Mario love on the down-low, here is a hand-painted Super Mario Bros. Bra.

Nobody has to know that you’re a hard-core Mario fan except for you and perhaps your significant other. Wearing this bra will take you back to a time when all that mattered was conquering Bowser at the end of Nintendo’s first Super Mario Bros. game, and if there were enough Cheetos in the bowl to last the game.

The cups on this bra are painted to look like a scene from Super Mario Brothers! Hand painted using acrylic paint with a textile medium. It is permanent and washable, and it will come with care instructions. Available in most sizes.

And you are living proof to your parents that years of playing video games doesn’t equate to brain death and failure in life. Never mind that you have residual carpal tunnel syndrome and Nintendo thumb.

Also, quite popular in the boudoir is the Star Wars R2-D2 Bra.

Remember the Super Mario Bros. Wall Decals from a while back? There was an 8-bit graphics version and a high-resolution 3D version. Both were very cool, but they were a little pricey and needed a lot of wall space. These Super Mario Bros. Removable Wall […]