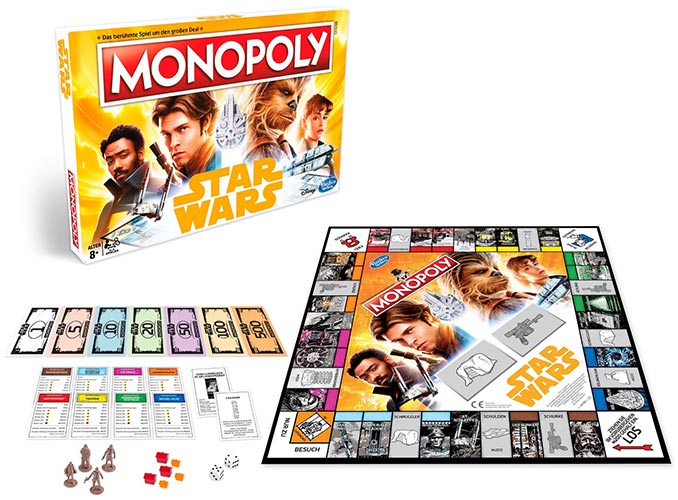 There’s a new Star Wars Movie, so there’s a new special edition Monopoly board game — Solo: A Star Wars Story Monopoly Game. It’s like the classic game, but with hideouts and facilities. There are four character tokens: Han Solo, Chewbacca, Lando Calrissian, and Qi’ra. Instead of Chance and Community Chest there are Scoundrel and Smuggler cards.

Given that Solo: A Star Wars Story is shaping up to be a big hit (given the positive buzz from the premiere), it will be hard to choose between this and some of the other recent special edition Monopoly games like Rick & Morty, Deadpool, Nintendo Gamer, The Big Bang Theory, and Stranger Things.

Enter a world of smugglers and journey with Han Solo and his fellow scoundrels with the Solo: A Star Wars Story Monopoly game. From the battlefield to the spice mines, the last player left with money when all other players have gone bankrupt wins!

Buy Solo: A Star Wars Story Monopoly for $19.99 at Target. You can also find it at Shop Disney, Game Stop, Barnes & Noble, and Hasbro.