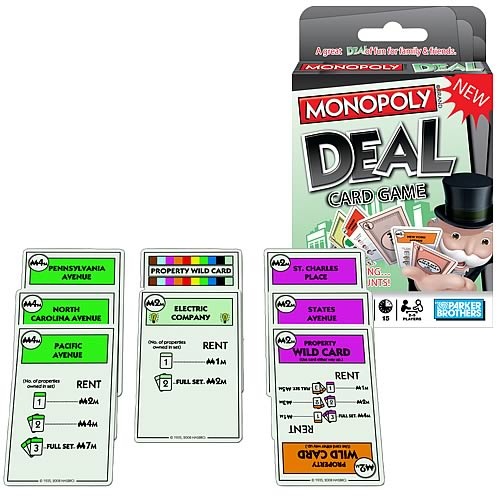 The classic tycoon game gets a massive makeover in the Monopoly Deal Card Game. I think this version would be most appreciated by those who travel a lot. It’s easier to take games on the go if they’re in their card versions, like the Worst Case Scenario Survival Card Game.

This version of Monopoly will have you swapping properties and collecting rent, sans the board and player tokens. The Monopoly Deal Card Game is definitely a toned-down version of the original, but that’s what makes it so easy to play while you’re on the go.

Check out these other special editions of Monopoly, too: the Star Trek Klingon Monopoly, the Monopoly Cars 2 Race Track Game, and the Hello Kitty Monopoly.

Monopoly is now in a whole new category! Monopoly’s brand iconography and heritage are featured in this dynamic card game of acquisition, dealing, and trading. Be the first to complete 3 property sets by collecting, swapping, and dealing. But be careful – one wrong card and you could lose everything!

The Monopoly Deal Card Game is available from Entertainment Earth for $6.99.

There are tons of Hello Kitty products, such as the Hello Kitty Headphones and Calculator we recently listed. We even listed  a number of Hello Kitty Mobile Phones before, but those were nothing like this Hello Kitty Wristwatch Cell Phone. This mobile phone not only […]

Girls love to build and play with building blocks just as much as boys, although they may prefer Hello Kitty over LEGO Batman and Catwoman. If you have a younger sibling or daughter that you want to introduce to the world of building blocks, this […]

Why buy a run-of-the-mill digital photo frame when you can get a fabulous Hello Kitty Digital Photo Frame, encrusted with hundreds sparkles and plenty of girly-girl attitude? Store and display your utterly adorable snapshots on Sanrio’s glittery gem of a frame, outlined in Hello Kitty’s iconic face as […]

Now that the 2012 Summer Games are upon us, millions of eyes will soon be set on London. For the occasion, Hello Kitty has dressed in her best swimwear as seen on the Hello Kitty Union Jack Swimsuit Plush Doll. Most cats hate getting wet, […]

Two things that never go out of style are backpacks and Hello Kitty. Put ’em together and what’ve you got? Bibbity bobbity Hello Kitty backpack; the Plush Hello Kitty Head Backpack, to be exact.