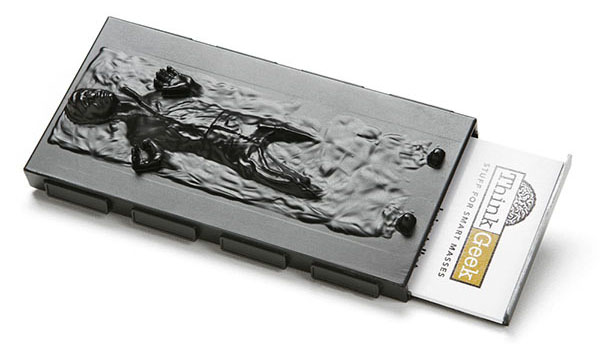 Are you a Star Wars fan who’s special enough to carry around your own business cards? Well, carry them around in this classy yet dramatic Han Solo in Carbonite Business Card Case.

That scene when Han Solo gets sandwiched into carbonite is one that we will carry with us to the grave. That’s why so many items have come out trying to capture the intensity of Han’s grief and how powerful that movie clip is to viewers. We’ve seen another rendition of the Han Solo Carbonite Business Card Holder in metallic silver, which is perfect for fancy outings. But there have been other unique items stemming from the same theme, including the Han Solo Chocolate Bar, the Han Solo Carbonite iPhone Case, Han Solo in Carbonite Ice Cube Tray, and a Han Solo Carbonite Desk.

I wonder what Harrison Ford thinks about seeing his young self immortalized in so many different ways. Not to mention all the wax figures they’ve made of him as Han Solo and Indiana Jones. Must be flattering.

Bring this Zinc alloy Han Solo in Carbonite Business Card Case along with you to places where you’ll schmooze and network. One glimpse of the card case will gain you instant friends.

You can find the spring-loaded Han Solo in Carbonite Business Card Case at ThinkGeek.com for $24.99.