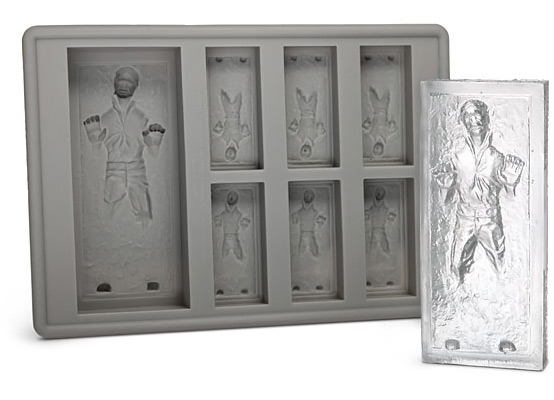 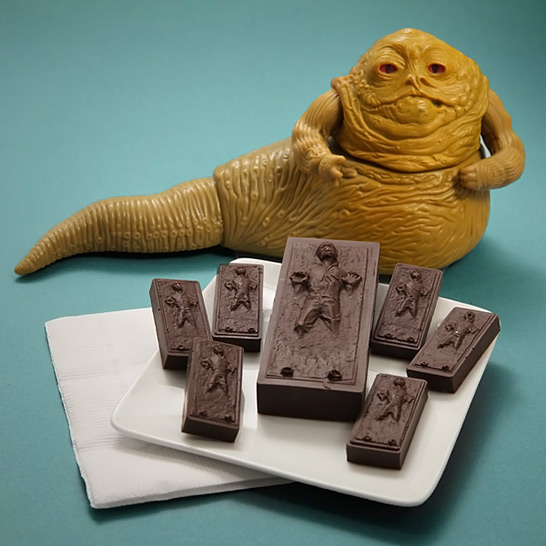 Sure, there are other cool ice cube trays with awesome shapes like like Robots, Fangs, Titanic, Chess Pieces, Moai Statues, UFOs, Hip Hop, Dinosaurs, Submarines, Space Invaders, Chill Pills, and AK47 Bullets. However, with Star Wars geeks like me, none of them are quite as desired as the Han Solo Carbonite Ice Cubes. Frozen ice is obviously a good choice for Carbonite, but milk chocolate bars made with these silicone molds looks amazing as well.

The Han Solo Ice Cube Tray comes with room for six (6) small, 1.75″ Han Solos and one (1) large, 3.5″ Solo. We’re pretty sure that Boba Fett would be happy with just one smuggler on ice but seven would be a serious payday! The silicone on the mold is good down to -40F so don’t try using these on Hoth. They should be fine in your average household freezer though.

Han Solo in Carbonite Ice Cube Trays are available for $9.99 from ThinkGeek.com. They are also available from Neatoshop for $9.95.

Update August 2011: ThinkGeek.com ran out of stock very quickly and there is no current ETA on more. EntertainmentEarth.com is expecting to get them in stock very soon, so it would be a good idea to pre-order this now, because chances are they will sell out very quickly.

We just posted that the Han Solo in Carbonite Ice Cube Tray is finally available, and are happy to report that the Star Wars R2-D2 Ice Cube Tray is also in stock and ready to ship. Just like the carbonite ones, we’ve been waiting for […]