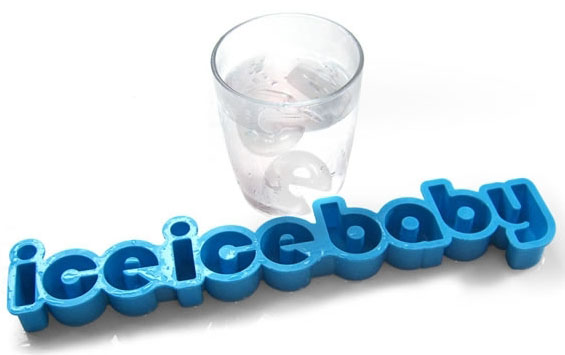 You know what’s super geeky? Well, first of all these 10 Geeky Ice Cube Trays to Help You Chill have earned their GA props. But having a hip-hop-themed party is about as geeky as it gets. I was invited to one this year and I couldn’t make it, but I saw the party pix on Facebook and things were off da hook.

People in hip-hop don’t need to advertise their parties as “hip-hop” …they’re just parties. But of course geeks don’t get invited to real hip-hop parties so they have to throw their own. In this case, there are some absolutely perfect ice cube trays that create ice worthy of chilling people’s bottles of Cristal. Firstly, you need these cubes made from the Hip Hopsicles Ice Tray – dollar signs, turntables, mics and boomboxes – bold and blingy like your 2.0 carat stud earrings. Second, you need to make cubes out of the Ice Ice Baby Ice Cube Tray, because you know you still have every single word to Vanilla Ice’s one hit wonder memorized.

It’s a good thing the tray is officially licensed, because we remember what happened to Mr. Ice and the fiasco with the Queen’s song “Under Pressure.” “Ice Ice Baby” wouldn’t have become the song it is without Queen’s iconic riff. In the end, it was all good and both parties probably helped each other in terms of popularity and song recognition.

Since each letter of the ice baby tray gets separated when the ice pops out, it may be best to color the cubes with juice or food coloring so that people can decode what their drinks are trying to tell them; which is basically stop, collaborate and listen!

Though Vanilla Ice has switched over to the construction industry in recent days, he must be proud to look back on his legacy and taking the risk to gank Queen’s music. Some celebs get dolls made after them, but in my opinion, having an ice cube tray is way cooler.

Those that loved the Pacman Cookie Cutters, you will no doubt want to get their hands on the Pacman Ice Cube Tray. Use Kool-Aid or Juice to add color to the ice, or use the silicone tray as a mold for Jello, chocolates, or other […]

Practice your Scarface accent. Channel your inner Tony Montana. Then make some ice in this Handgun Shaped Ice-Cube Tray and tell your guests to “Say Hello To My little Friend” as you ice their drinks.

It’s hot outside, so drinks with ice cubes are a must this time of year. You might as well have some fun with your ice as you are cooling off. That’s what the Gin and Titonic Ice Cube Tray is all about.