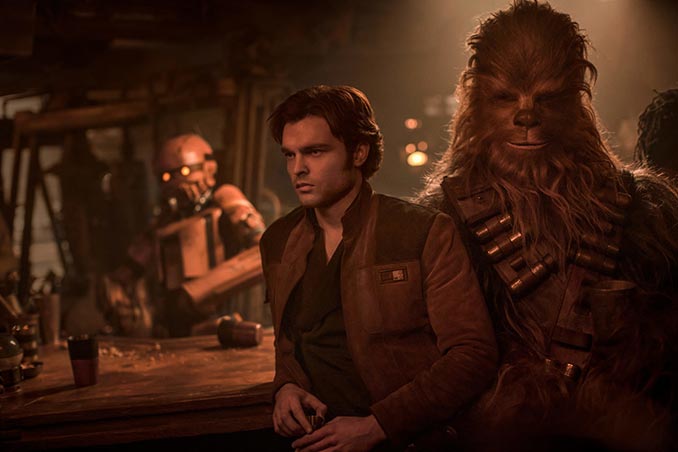 Before we were limited to the quick Solo Premiere Reactions, but this afternoon Disney lifted the embargo, leaving critics free to publish their full Solo reviews. We’ve collected and summarized many reviews from leading critics and quality geek sites in this Solo: A Star Wars Story Reviews Round-Up to give you an overall picture of what people think of this movie.

Overall critics think Solo: A Star Wars Story is a fun movie with terrific performances from the actors, but it has a bumpy start and is a bit bland as a result of playing it too safe.

Jamie Graham gives the movie a 4 out of 5 stars in his review at Games Radar where he declares it “far better than we had any right to expect.”

Hitting lightspeed from its opening sequence and rarely letting up, Solo doesn’t have the emotional heft or lingering impact of The Force Awakens, The Last Jedi or, indeed, Rogue One, but it’s the most fun entry since A New Hope. … And Ehrenreich? He pretty much nails it, cleaving close enough to Harrison Ford’s voice and mannerisms, swagger and heart, that you actually begin to think he looks like a young Ford the more the movie goes on. Don’t expect this movie to fly solo – a flyboy franchise is a guarantee.

Chris Evangelista’s Solo Review at SlashFilm calls it “a highly entertaining adventure that’s not really about anything” and gives it a rating of 7 out of 10.

Solo merely exists to set up more Solo movies. And it shows. Perhaps I’ve been ruined by Star Wars: The Last Jedi. Rian Johnson’s film is loaded with ideas – it’s a big, bold, brilliant film with a lot on its mind. Solo, in contrast, just wants to have a good time and then roll the credits. Maybe that’s not such a bad thing. Maybe that’s exactly the sort of adventure you’re looking for.

Don Kaye at Den of Geek gives Solo: A Star Wars Story only 3 out of 5 stars despite being impressed that it as entertaining and cohesive as it is despite the production drama.

Solo is not a bad film, just a relentlessly average one that has no reason to exist except as a money machine. It gets its protagonist from point A to point B efficiently enough, but it doesn’t tell us anything we need to know that we didn’t already glean from our first meeting with Han in a cantina 40 years ago. It doesn’t shake up the mythology or offer any real emotional investment, yet at the same time, it’s funny, fairly fast-moving, and at times enjoyable.

RogerEbert.com critic Matt Zoller Seitz gives it 2 1/2 out of 3 stars with nods to the performances and humor, but disappointment in the programmed nature of the copious fan service.

“Solo” is hauntingly effective in a very specific way: it gives you a strong sense of Han Solo and Chewbacca’s friendship: how it formed, how it solidified, and what it gave to each of them. Now that we’ve seen the full arc of Solo’s life, the innocent joy of discovery that’s present in every scene between the two of them acquires a sorrowful undertow. … If the entirety were as charming and unexpectedly haunting as the friendship between Han and Chewie, “Solo” might’ve been a classic. As is, it’s a frictionless trip down memory lane.

At IGN, Jim Vejvoda’s review complements the film’s fun and entertainment value, but expresses disappointment in the fact that it doesn’t explain how Han became the character we meet in A New Hope.

Solo: A Star Wars Story commits to being a charming and fun exercise in repackaging nostalgia and pre-owned protagonists. It’s just too bad its script never fully committed to seeing through Han’s arc — and those characters who are supposed to have shaped him into being the iconic version we all know and love — to its preordained end.

At Bleeding Cool, Bill Watters says that Solo: A Star Wars Story is a fairly good film in his spoiler-free review where he gives the movie an 8 out of 10 stars.

Solo is a capable, fun, and engaging film. However, whether any individual fan will be able to engage with it will depend entirely if they can make peace with another actor sitting behind the controls of the Falcon. And if it’s not, then the franchise likely ended for them already back in ’83.

At The Verge, Bryan Bishop’s review praises screenwriter Lawrence Kasdan “as the defining voice of the Star Wars universe.”

And by the end of Solo, it’s difficult to argue that anyone can capture that core sensibility better [than Kasdan]. Credit certainly goes to Howard, as well, for his economical directing style, which puts the focus on the characters and keeps it there. But even his approach is ultimately in service to the Kasdans’ script.

At The New York Times, A.O. Scott provides more spoilers than you may want in his Solo: A Star Wars Story review, where he describes it as “curiously low-stakes blockbuster, in effect a filmed Wikipedia page.”

Unlike “Solo,” which ambles from one set piece to the next in a spirit of genial in-betweenness. It doesn’t take itself too seriously, but it also holds whatever irreverent, anarchic impulses it might possess in careful check. … There are some fine action sequences, and some that don’t make much sense at all. There are a handful of secondary characters who come close to upstaging the hero. … But one thing that remains curiously unexplored is how Han became the wary, cynical guy Princess Leia (and everyone else) fell for back in the Carter administration.

Eric Eisenberg at Cinema Blend gives the movie 3 out of 5 stars and describes it as having many of the same issues as the prequels.

Solo: A Star Wars Story is a ricocheting experience of highs and lows, and the end result doesn’t inspire any real extreme reaction — as hard as that might be grasp in the world of modern blockbuster filmmaking. It’s just… fine. It’s certainly way better than any of the films in the prequel trilogy, but also the weakest of the most recent generation of titles (which have ranged from really good to excellent).

From a visual standpoint, the production admittedly looks quite lovely, with cinematographer Bradford Young and production designer Neil Lamont establishing some strikingly resonant delineations in the contrasting industrial/desert/alpine intergalactic landscapes.

Although Howard dependably steered the production back on tonal course after the original directors reportedly took it in a different, less traditional direction, the realignment has ultimately resulted in something that feels a bit too comfortably familiar.

Consequence of Sound critic Michael Roffman praises the fun and entertainment delivered by the picture in his Solo: A Star Wars Story Review.

Ehrenreich injects a palatable starry-eyed wonder into the performance, effectively connecting with an audience that came to love and worship Han for being such a relatable hero. … It helps that he’s surrounded by such an enigmatic cast, one in which characters can naturally co-exist together and stand on their own if needed. …

There’s something that this movie hits upon that very few others do, and again, it’s this idea that we’re having fun again. … Whether we follow Han Solo through hyperspace for more adventures is up to Disney, but what we got here is enough to keep us coming back again and again.

It’s still pretty early, so numbers at the review aggregators are going to changes as more reviews roll in. Currently, Metacritic has Solo: A Star Wars Story at a metascore of 66 with generally favorable reviews based on 33 critics. Over at Rotten Tomatoes the movie has score of 73% on the Tomatometer based on 80 reviews from critics (58 fresh and 22 rotten reviews).