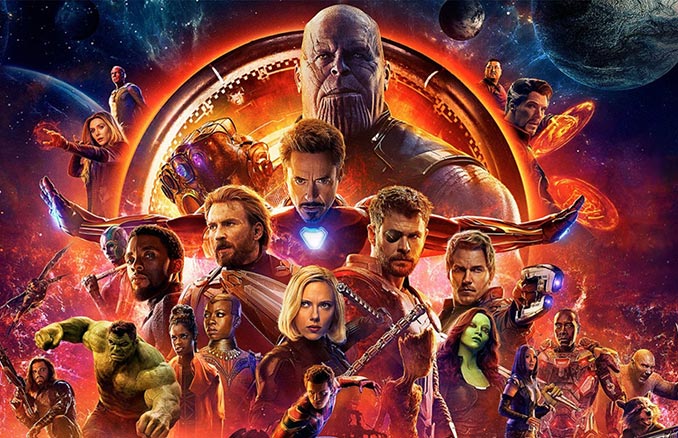 Marvel’s latest movie opens today, and most of us are curious how it rates, even if we will see it no matter what. Read this Avengers: Infinity War Reviews Round-Up to get an overview of what some geek critics think of the movie. Don’t worry, it’s safe—we won’t include any spoilers here. (If you click through to the full Avengers: Infinity War reviews there may be spoilers, but they should warn you before they get into spoilers.)

Overall, critics and audiences really like Avengers: Infinity War, although it is a long movie at 2 hours and 40 minutes. There aren’t many bad reviews, though some critics consider it just “good.” However, many are much more favorable with some reviewers even considering it as one of the best superhero movies of all time.

Without further ado, here is the overview Avengers: Infinity War reviews from select geek critics. (Do you really care what the Forbes, Wall Street Journal, and the New York Times thinks about this movie, or would you rather see what fellow geeks think?)

Over at Den of Geek, Don Kaye says that Marvel delivers in a big way and gives Infinity War a 4 out of 5 stars.

There are … lots of surprises and jolts in Infinity War (not to mention one mind-blowing cameo), but Feige, the Russos and Markus/McFeely reserve the biggest one for the end. The studio has been accused of making formulaic movies and sticking to a shopworn script, and—like any creative enterprise—it does sometimes fall into that trap. But more often than not, Marvel doesn’t get credit for the chances it takes, and it’s taking a hell of a huge one this time. Where things go from here is anyone’s guess, but after 10 years and two-and-a-half hours of calamity and battle, Avengers: Infinity War’s strangely peaceful closing shot makes a kind of beautiful sense.

At IGN, Scott Collura’s Review likes the huge cast of fully developed characters and the fact that the movie pulled no punches.

Using the strength of its powerful and interesting villain to set the stakes higher than ever, Avengers: Infinity War successfully brings together the past 10 years of Marvel movies into a largely effective cocktail of super-heroic dramatics. The fact that it manages to give nearly every member of its admittedly overstuffed cast at least a moment to shine is its greatest feat. Sure, it ends on a cliffhanger, but those final moments elevate the entire series in a poetic, if horrific, coup de grace.

Mark Cassidy over at ComicBookMovie.com gives the film 5 out of 5 stars and raves that “Marvel may have delivered the greatest superhero movie of all time.”

Marvel Studios has never produced a film quite like Avengers: Infinity War – and you’ll find out why when you see it! Some will undoubtedly hail it as the greatest superhero movie of all time, and while that’s obviously debatable, there’s no doubt that The Russos have delivered on 10 years of build-up and next-level anticipation. Avoid the spoilers, and you’re in for quite a ride.

In the SlashFilm review, Josh Spiegel says that it is just one half of a larger story and rates it a 6 out of 10.

Yet it is a little hard to talk about Avengers: Infinity War in full, if only because we’ve only seen the first half of this story. The Marvel Cinematic Universe began 10 years ago … and was built on the notion of an interconnected world full of heroes with shocking new powers. But a number of those films felt like stand-alone pictures… Infinity War, by design, feels like one half of a completed puzzle, with the other pieces strewn about waiting to be put together. Maybe once it’s whole, the puzzle will be wholly satisfying. For now, Infinity War suggests that Marvel is able to wrangle together a massive, charming cast, but not quite create a story that deserves their presence.

Bill Watters at BleedingCool.com gives Avengers: Infinity War a 9 out of 10 in his spoiler-free review, and says it “hits the ground running with an intensity that manages to put itself into the same arena as Mad Max: Fury Road.”

The film overall is not as technically a superb film as Black Panther. There are flaws, and trying to bring together characters like the wise-cracking Guardians (especially Star-Lord) into the mix of a very dark and more seriously toned storyline almost becomes discordant at times. There’s moments where it works, but then there are others where it feels very out of place. The movie sails along and you don’t feel it’s long running time, except perhaps during the times where Dr. Strange and Tony Stark both try to out-do each other…

At Ars Technica, reviewer Sam Machkovech is less positive and says the movie is fun and polished, but has a hollow core.

But there’s no leaving this film in a turn-your-brain-off, have-a-good-time way. The stakes of Infinity War feel impossible to shrug off like other popcorn-munching blockbusters. That’s the worst part about this film—it left me feeling hollow, both as an incomplete story and as a parable for what heroes can, and should, do in the face of great adversity.

Matt Maytum at Games Radar gives it a 5 out of 5 stars and calls it “bold, ballsy, satisfying, and dramatic.”

But any complaints are small fry in a film this bold, ballsy, satisfying, and dramatic. For delivering on fan expectations that have snowballed during 10 years of the MCU – and doing so with wit, pace, and surprises aplenty – Infinity War deserves a huge, bejeweled high-five.

What do you think? Post your reviews in the comments.