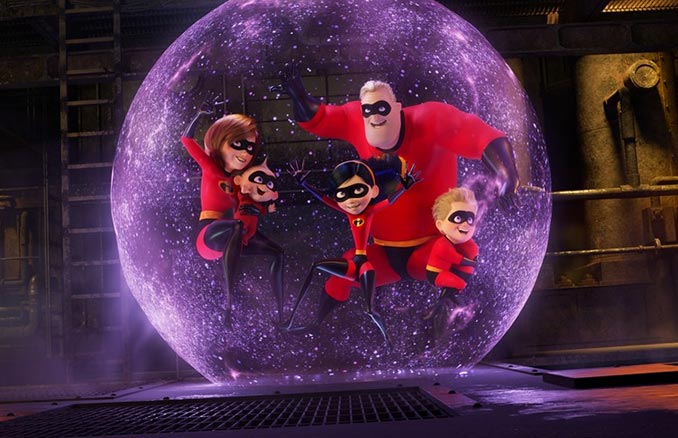 Today, June 15, 2018, is the day that Disney Pixar’s The Incredibles 2 hits theaters. Is it good? We answer that question quite definitively in this Incredibles 2 Reviews Round-Up.

It’s been a long time—nearly 14 years—since the original The Incredibles came out in 2004. Because of the long wait, and the sustained hype for this sequel (there was the Sneak Peak Trailer, Official Trailer, Suit Up Trailer, and copious Merchandise already) it’s easy for the film to be a letdown. Fortunately, that is not the case, as the reviews are overwhelmingly positive, with the consensus that this sequel nearly lives up to the quality of the original movie.

So let’s examine what some of the best critics have to say in this Incredibles 2 Reviews Round-Up:

Perhaps the best way to describe Incredibles 2 is to say that it has character — it’s not bound to a larger universe, and the freedom and distinct sense of personality that freedom allows is (fittingly enough, given the movie’s themes) what makes the film special.

Brad Bird’s strong script and direction elevate this animated adventure to new heights. Instead of trying to copy or parody the superhero films of the past 14 years, Incredibles 2 embraces what made its first outing so memorable: The Parr family and their willingness to work together in the face of seemingly insurmountable odds.

Josh Spiegel over at /Film thought it was better than recent Pixar sequels but not as good as the first movie. He gave it an 8 out of 10 rating.

The expectations this studio places on itself, and that audiences place upon them, are sky-high, to a possibly damaging point. … The Incredibles is one of Pixar’s, and Brad Bird’s, best films. Bird is a good enough filmmaker that Incredibles 2 doesn’t come close to matching his personal best. But it’s a more exciting film than the last spate of Pixar sequels, both thrilling and thought-provoking.

At Nerdist, M. Arbeiter was less impressed. They think it is fun, but not exceptional, and only give it a 3 out of 5 rating.

To be sure, Incredibles 2 reminds its viewers Helen Parr is cool, brilliant, unflappable—not just super, but exceptional. As such, it’s a shame the story surrounding her is anything but. With a story, a conflict, and characters so decidedly realized and meticulously interwoven,The Incredibles truly did set the bar at breaking the mold. To say Incredibles 2 falls short is not to say it isn’t good—it is. But exceptional? That’s another story. And quite frankly, it should be this one.

Bob Chipman at Geek.com was disappointed and gave it just 2.5 out of 4 stars.

The animation is excellent, the retro-aesthetic works as well as ever, Michael Giacchino’s score is consistently good and the staging of the fights and action scenes is endlessly inventive. It’s just too bad that there’s not a strong story or any real character depth to connect to it beyond whatever attachment you may or may not have maintained with the heroes from the first movie.

On the other hand, Mike Sorrentino at CNET was really impressed and declared that “Pixar makes superheroes fun again.”

After the amazing but emotionally exhausting Infinity War, it’s certainly time for something a bit lighter, and ideally something that isn’t burdened with years of complex continuity. Incredibles 2 succeeds by telling a family-friendly superhero story that also gives Pixar’s animators the opportunity to stretch their muscles.

And if this is the dazzling update Pixar has given the Incredibles, I can’t wait to see what’s in store for next year’s Toy Story 4.

David Crow at Den of Geek gave Incredibles 2 a rating of 4 out of 5 stars in his review.

That the animated family can go there, and genuinely make the case for why the concept of superheroes were so euphoric once upon a time in spite of mass commercialization, causes this film to have the kind of zip only reserved for Dash. In that sense, it’s kind of incredible, really.

At Forces of Geek, Kristen Halbert considers the film fun for all ages.

Incredibles 2 is not quite worth 14 years of wait time. But it is still a worthwhile summer flick that demonstrates much love and care has gone into making sure that the audience that has been waiting those 14 years enjoys the film just as much as those who may have just seen it last month on Disney Channel.

Manohla Dargis in the NYTimes called it a “Fast Blast” although she has some issues with its political messages.

[M]ore so than in the first installment, Mr. Bird is working to the steady beat of a classic action movie — ka-boom, yakety-yak, ka-boom — so much so that there are times when you wish that he would slow things down and let you luxuriate longer in the sheer loveliness of his images.

Jim Batts review at We Are Movie Geeks gives the film a 5 out of 5.

Yes it’s well worth the wait! Certainly, but I hope it’s not another 14 years before we catch up with the Parr family. Here’s to another super (and superb) entertainment to follow INCREDIBLES 2 (maybe Dash could intern at Pixar)!

Julian Roman at Movie Web thought it was a thrilling superhero sequel.

Disney and Pixar do not disappoint after a fourteen year Incredibles absence. Incredibles 2 is top notch family entertainment. I also dug the hell out of the swinging jazz soundtrack and the supers catchy theme songs. Frozone’s is like a Barry White seventies funk anthem…so chill…so chill.

At RogerEbert.com, Brian Tallerico gives Incredibles 2 a rating of 3.5 out of 4 stars.

Parents should be warned that “Incredibles 2” is long—almost two hours—just like the first one, and there is an unavoidable sense that some of the wonder of the concept has been diluted since the first film. Having said that, “Incredibles 2” understands something that most family sequels, even the Pixar ones, fail to comprehend—we don’t just want to repeat something we loved before. We want to love it all over again. You will with “Incredibles 2.”

Todd McCarthy at The Hollywood Reporter calls it “incredible enough.”

Boosted by central characters that remain vastly engaging and a deep supply of wit, Incredibles 2 certainly proves worth the wait, even if it hits the target but not the bull’s-eye in quite the way the first one did. It remains to be seen whether everyone who loved the original when they were 6 years old and is now 20 will rush out to catch this follow-up, but there’s plenty of crackling entertainment value here for viewers from 5 to 95.

Brad Bird’s Incredibles 2 is, much like its predecessor, delightful as an animated feature but really, really delightful as a superhero picture. It’s proof that someone (not anyone, mainly Bird) can make a Marvel-type movie that’s fleet and shapely, with action sequences rich in style rather than tumult. He’s a crackerjack filmmaker first and a marvelous animator a close second, and he has made the jazziest hybrid in years.

Owen Gleiberman at Variety thought it was fun but too much of a replay of the original.

“Incredibles 2” offers a puckishly high-spirited but slightly strenuous replay of the original film’s tale of a superhero family working to prove its relevance. Once again, the family’s members are on the cusp between humdrum domesticity and saving-the-world bravura. Yet what was organic, and even obsessive, in the first outing comes off as pat and elaborate formula here. The new movie, energized as it is, too often feels like warmed-over sloppy seconds, with a what-do-we-do-now? riff that turns into an overly on-the-nose plot.

Over at the aggregation sites is where Incredibles 2 really shines. At Rotten Tomatoes it’s certified fresh with 93% on the Tomatometer and scores an impressive 94% from the audience where it gets an average rating of 4.6 out of 5. At Metacritic, it also scores very well with a Metascore of 80 from critics and a 9.2 out of 10 User Score.

If you’re a fan of the original film with this family of superheroes, note that you can now get The Incredibles 4K UHD and the brand-new LEGO The Incredibles Video Game.

Incredibles 2 will be out on June 15 and the Video Game is coming out the same day, but tomorrow, June 5, 2018, will be the release of The Incredibles on 4K Ultra HD. It’s also called The Incredibles: Ultimate Collector’s Edition, and it finally […]