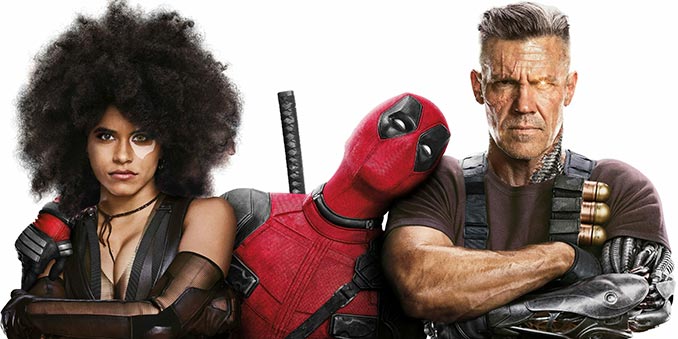 Deadpool 2 is one of those movies that really doesn’t need reviews. If you loved Deadpool, you’re probably going to love Deadpool 2. If you hated Deadpool, then don’t even bother thinking about the sequel. Despite this, GeekAlerts still made this Deadpool 2 Reviews Round-Up, where we summarize many critics reviews and give you an overview of Deadpool 2 reviews.

Although there is a different director (David Leitch versus Tim Miller), Deadpool 2 has the same writers (Rhett Reese and Paul Wernick) as the original. This time around the star of the movie, Ryan Reynolds, also gets a writing credit. Besides for Ryan Reynolds, other stars like Morena Baccarin and T.J. Miller returned to reprise their roles in the sequel. Given this continuity in development personnel, it is no surprise that critics overall think that Deadpool 2 is an amped up version of the original, stuffed full of meta gags, sardonic wit, bloody violence, and filthy humor.

Without further ado, here is our Deadpool 2 Reviews Round-Up:

Don Kaye at Den of Geek gives the movie a 4 out of 5 stars and says it is “bigger, funnier, and better than the first.”

Although perhaps a bit long, Deadpool 2 doesn’t really overstay its welcome. It does what a sequel should do: it expands the world of the original, adds new characters to the mix, and—as unlikely as it sounds—develops the protagonist in interesting new ways. Not all the jokes land, but many of them do, and clearly Leitch and company are working with more money, a broader variety of locales, better visual effects, and a star out to prove that the long-in-the-making first film wasn’t just a one-and-done deal.

Kyle Anderson’s Deadpool 2 Review at Nerdist, says the film is a lot of fun and matches the tone of the original, but doesn’t quite measure up. He gives it a 3 out of 5 reference-smothered burritos.

Ultimately, while Deadpool 2 is a lot of fun, it doesn’t quite pack the burst of energy the first one did; how could it?! It now feels like the studio is a little too in on the joke at some point, and the whole [appeal] of Deadpool is his outsider status. Reynolds was born to play Deadpool and I hope he keeps doing it forever, but in more of a supporting or ensemble position. DP2 is more of the same humor but in a bigger, more franchise-friendly package.

At Geek Culture, Sherwin Loh says Deadpool 2 satisfies and outshines the first in many ways and gives it an overall 8.9 out of 10 with a 10 out of 10 for geek satisfaction.

As much as Deadpool 2 tries to fit in everything from pop culture references, dick and fart jokes and even the Blackbird, it knows its own limits when it comes to being too self-referential. The laughs are more precise, the jokes are more cutting, but that’s why we love Deadpool. If anything though, there are a few missteps and it is when Deadpool tries to be too emotional, to be like every other hero that we’ve seen a hundred times over.

Over at /Film, Josh Spiegel calls this movie “a smug sequel that’s just as obnoxious as the original” and gives it a rating of just 3 out of 10.

The cast is largely talented enough, and willing to laugh at themselves. And anyone with even a moderate level of knowledge of superhero movies of the last decade will spot plenty of winking nods, from references to Marvel’s rival to an Airplane!-level attempt to mock the faux-profound musical compositions that accompany intense fights. But this movie’s script is so inside-baseball that it’s moderately alienating. One or two of the gags land — such as a non sequitur about Guy Pearce — but Deadpool 2 is mostly just a carbon-copy of its smugly satisfied predecessor.

At Ars Technica, Sam Machkovech is disappointed that the film isn’t better than the original. Even though it is still fun with funny wit and wackiness, it felt too formulaic.

We have to wait until the film’s final minutes to see a glimmer of how fun a future Deadpool-and-Cable film might turn out, when the characters finally exchange organic dialogue and interactions and tease the idea of the comic universe’s ultimate Abbott-and-Costello pair. After that is an even bigger tease of the series’ potential: an amazing after-credits spike that could have been the basis of an entire, yes-yes-yes sequel.

In his Deadpool 2 Review for Screen Geek, James Hadden gives the film a B+ and thought the “action scenes are once again both incredibly stylish and massively inventive.”

On the whole, Deadpool 2 is a great follow up to it’s hit predecessor, filled to the rafters with great gags, awesome action scenes, some spectacular cameos and at times some genuinely heartfelt performances from the film’s cast. Deadpool 2 is the ideal romp to counteract the more somber feelings you may have received from watching Avengers: Infinity War.

Over at Geek Girl Authority, Kimberly Pierce was impressed with the performances of Ryan Reynolds, Josh Brolin, and Julian Dennison.

Ultimately, Deadpool 2 is in an unenviable situation. With the massive success of the first film, what was previously a cinematic experiment now finds itself having to perform. They hit it out of the park once… can they do it again? There were some changes to this film (likely due to the changes in creative team), and they are noticeable. However, if you were a fan of the R-rated superhero comedy, you’re likely going to like this one.

Angela Watercutter at Wired declares that “Deadpool 2 is what all sequels should be: better than its predecessor.”

As Deadpool 2 builds to its surprisingly heartfelt ending, it becomes apparent that this sequel actually set out to be a movie, not just a series of jokes stuck to a Macguffin. There’s a story, and feelings, and they’re real! This is still a Deadpool movie, though; as soon as the credits roll, it takes a page from the other Marvel films and inserts [a] sequence that restores all the fourth-wall frivolity that set these films apart from almost everything else in the genre. It ends as it began: giving a middle finger to anyone with the gall to call themselves a hero and take the title seriously.

At IGN, Daniel Krupa believes that the sequel satisfies the raised expectations this time around and is “crasser, gorier, and funnier than the first.”

Deadpool 2 eventually draws its disparate elements together, gains momentum, and pushes towards something more closely resembling a traditional finale. In keeping with the rest of the movie, it’s still fairly small-scale and character-focused, and surprisingly, it’s emotionally effective too. Despite the character’s trademark flippancy, there’s a real unexpected warmth to Deadpool 2. Not only does the sequel explore this flawed character, it firmly establishes him as a loveable and effective hero.

The Deadpool 2 Review by Josh Wilding at ComicBookMovie.com gives the movie just 2.5 out of 5 stars. He feels that the antics already feel old, the writing is lazy, and the jokes are mostly juvenile. However, he does credit the action and the choreography in the fight scenes as being fluid, awesome to watch, and among the best in any superhero movie.

Ultimately, I’m confident that the vast majority will love Deadpool 2. Putting what I considered to be pretty awful humour aside, it’s a movie which delivers plenty of references fans will appreciate, some very memorable cameos, and stellar action scenes. Unfortunately, none of that makes up for a forgettable and underwhelming storyline, a tedious stream of lazy, uninspired references and pop culture references, and a “bigger is better” approach which doesn’t pay off. The sequel doesn’t live up to the high bar set by the first installment and is often a chore to sit through.

Finally, Brandon Davis at ComicBook.com gives a spoiler-free review where he gives it a 5 out of 5 stars and says that this sequel “builds on the successes in almost every way for 119 minutes of raunchy laughs and grotesque violence impressively being juxtaposed with an unexpectedly heavy amount of heart.”

Deadpool 2 is similar but superior to its predecessor. It is loaded with new characters for Reynolds to play with and brings out a different form (but possibly the best form) from director David Leitch.

Overall, Rotten Tomatoes currently has Deadpool 2 certified fresh on the Tomatometer at 84%. This is just a touch higher than the 83% the original scored. Also similar is the average rating of 7.2/10 for this one and 7/10 for the first one. The scores for the two films are also very similar at Metacritic. There this one gets a 66 Metascore, while the original has a 65.

Deadpool 2 is coming out tomorrow, and while there are plenty of Deadpool shirts out there to choose from, this Deadpool Whoa That Seems Excessive T-Shirt is probably one of the best. It ranks right up there with other cool new Deadpool merch like the […]