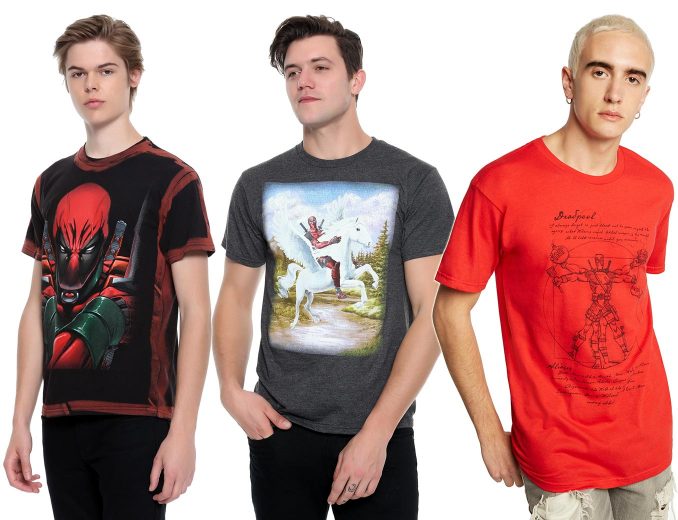 There are no shortage of Deadpool shirts, in fact, Deadly Tacos, Whoa That Seems Excessive, and Deadpool and Cable Outkast Stankonia are some of the latest. Hot Topic also has a large range of Marvel Deadpool Exclusive T-Shirts. These are shirts you can’t buy anywhere else, and many of them are really cool. If watching Deadpool 2 this weekend put you in the mood for a new shirt, check out this selection of 14 exclusive Deadpool shirts: 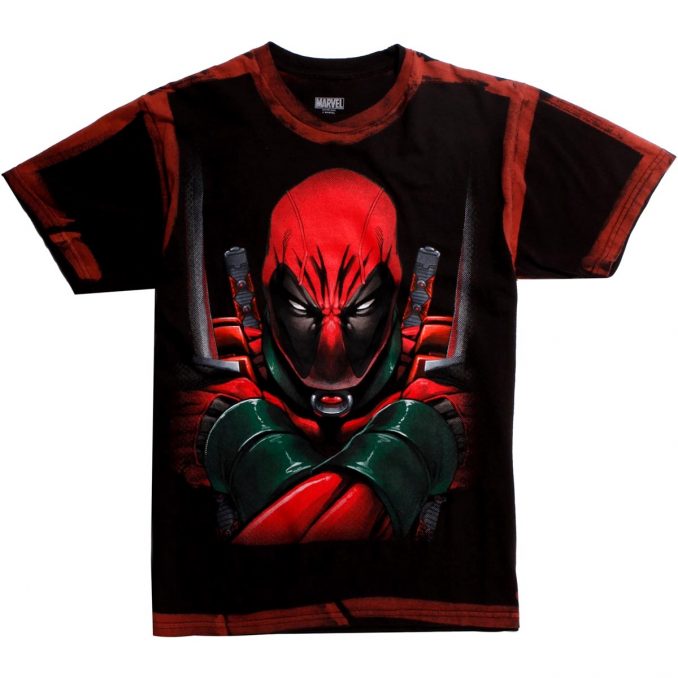 Deadpool is way cool, but he looks way cooler on this red wash T-shirt from Marvel. Like, why wear a plain black tee with his face on it when you can add his signature color? 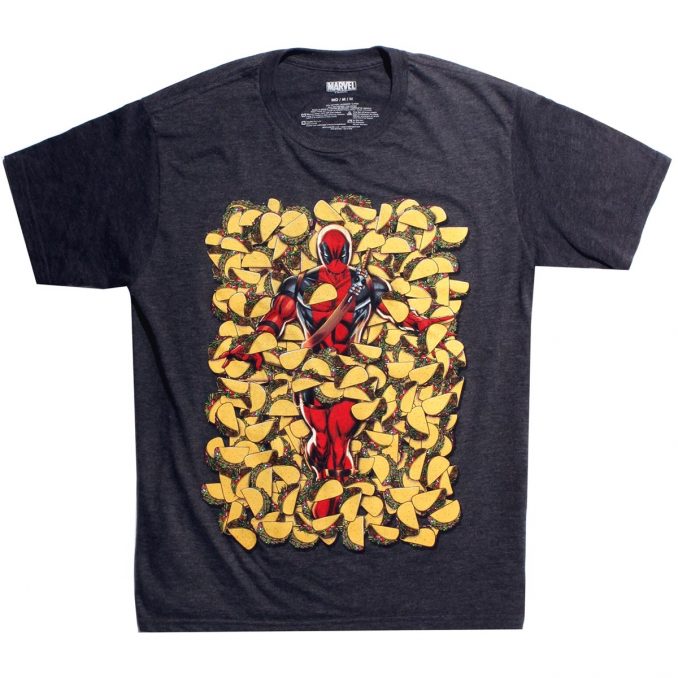 Deadpool surrounded by tacos. What a lucky bastard. This charcoal heather T-shirt from Marvel with an image of Deadpool in a sea of hard shell tacos. 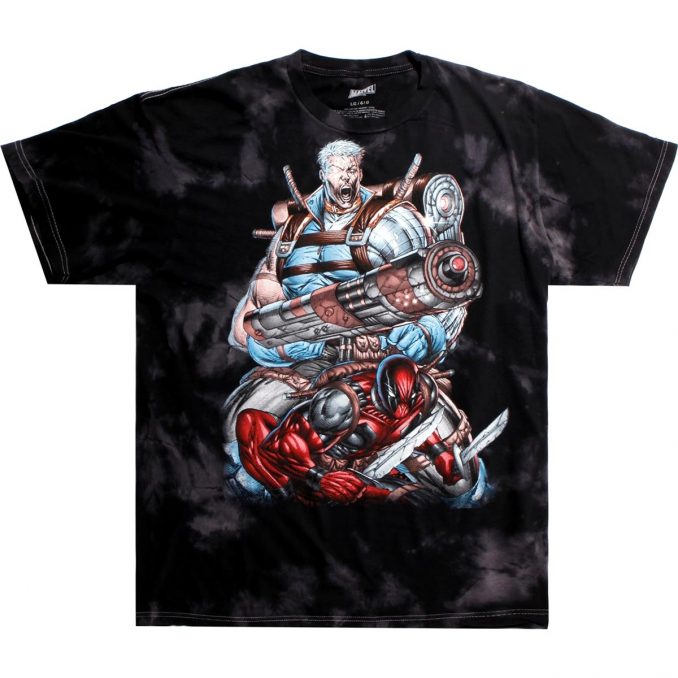 Frienemies til the end! This black and grey cloud wash tee from Marvel features a cartoon image of Deadpool and Cable on front. 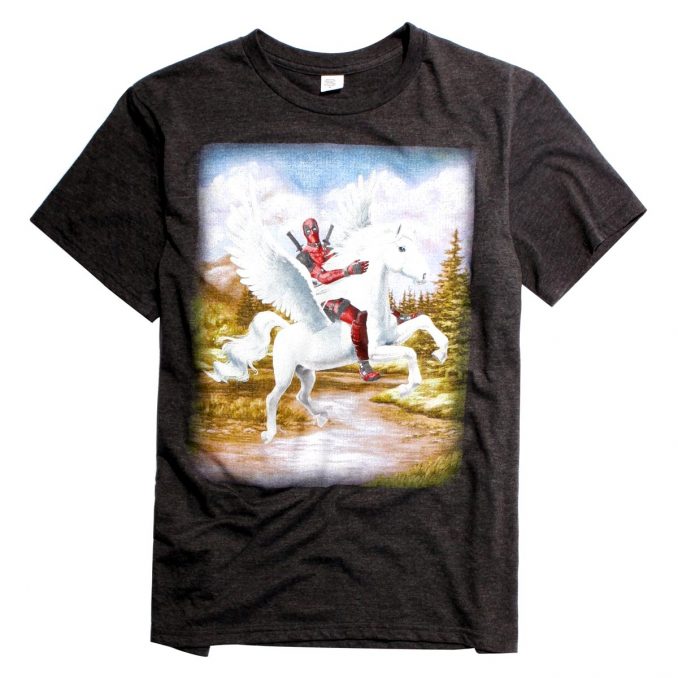 Have you ever seen anything more majestic than this T-shirt? Deadpool on a Pegasus? It doesn’t get much better. 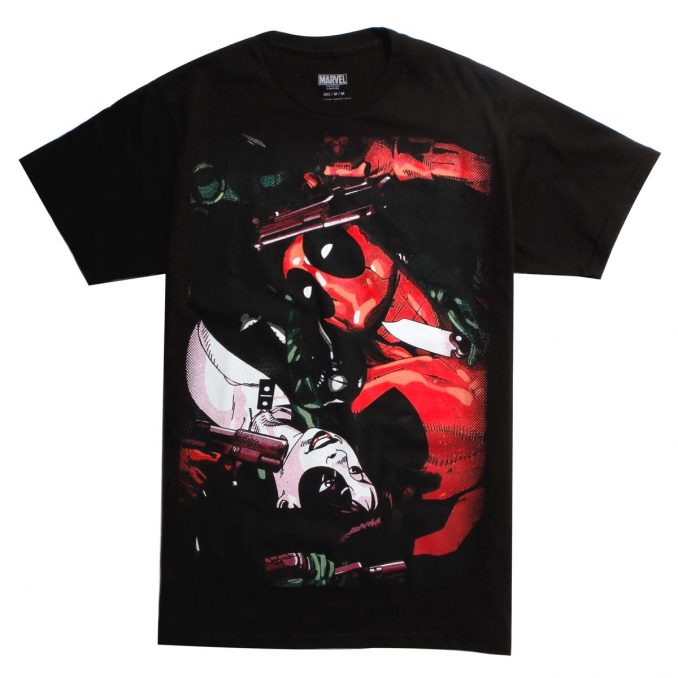 Domino and Deadpool make an appearance on the front of this T-shirt from Marvel. Can you even handle the wit that goes down between these two? 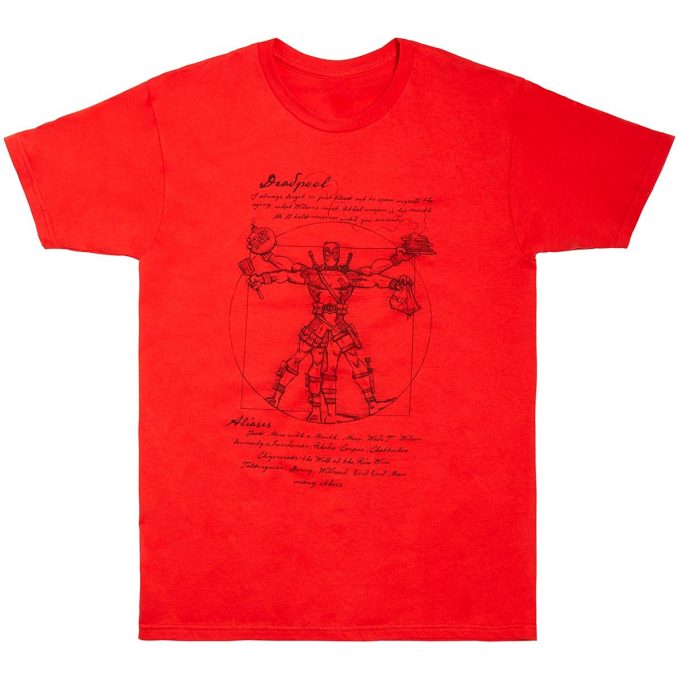 Marvel’s antihero gets the Vitruvian treatment on this red tee featuring a drawing of Deadpool in the style of the Leonardo da Vinci work.

Deadpool vs. Cable…only one will walk away! Who are you putting your money on? This grey tee from Marvel’s X-Force has an image of the two duking it out on front. 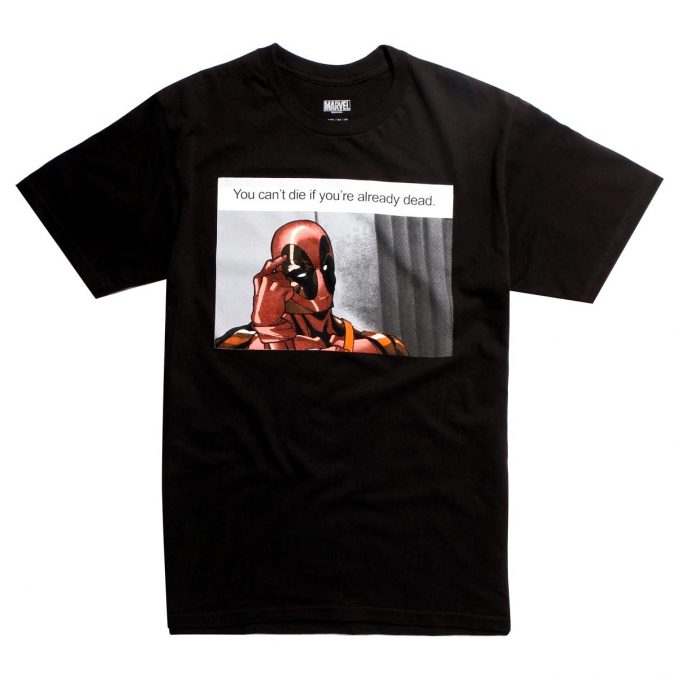 Are you ready for some words of wisdom straight from the Merc with a Mouth? This black T-shirt from Marvel features Deadpool saying “You can’t die if you’re already dead.” 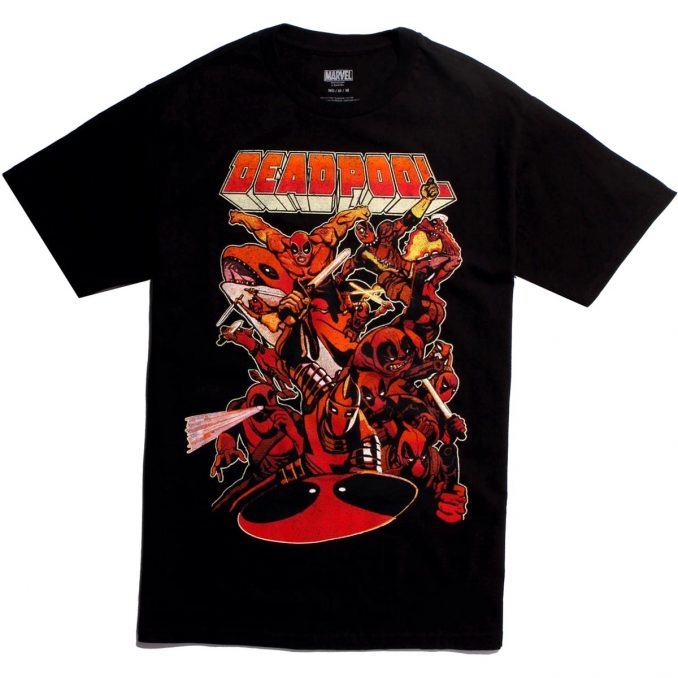 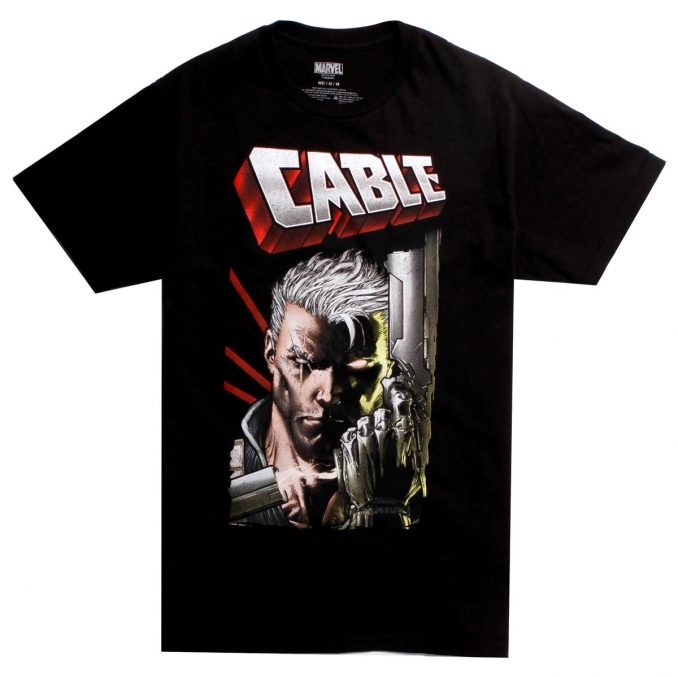 My name’s Cable. I’m here for the kid.

Black T-shirt from Marvel’s Deadpool with an image of Cable’s face front and center. 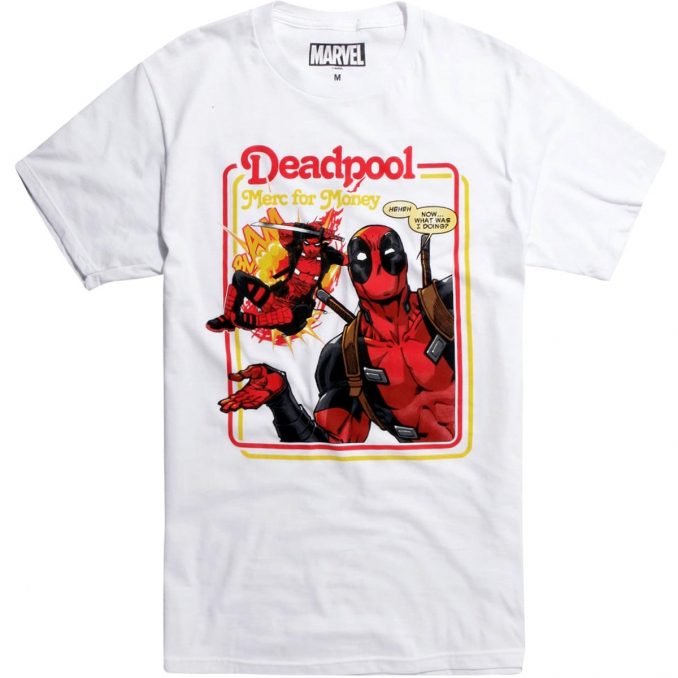 Merc with a Mouth. Mercenary for hire. Merc for Money. Besides revenge, it’s what Deadpool is all about. This white T-shirt from Marvel has a retro image of Deadpool on front. 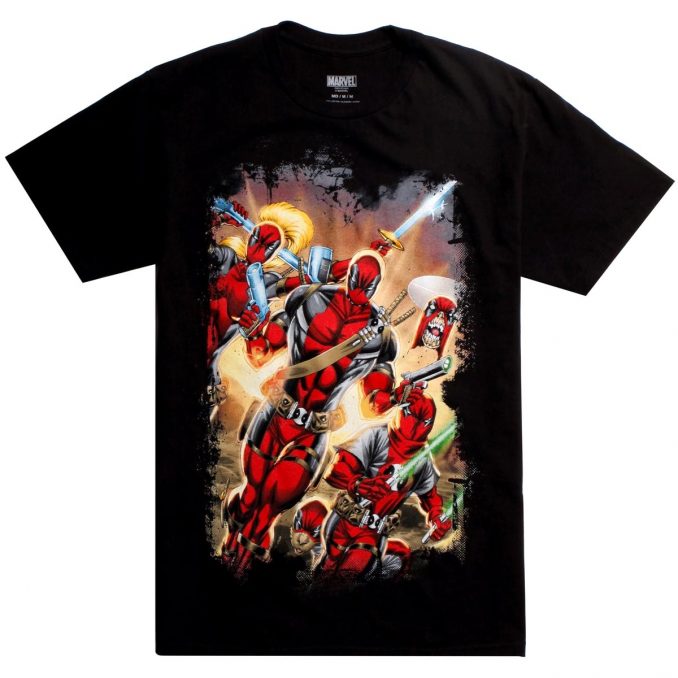 Deadpool Corps is a team of Deadpools from alternate universes. The whole family appears on the front of this shirt from Marvel. 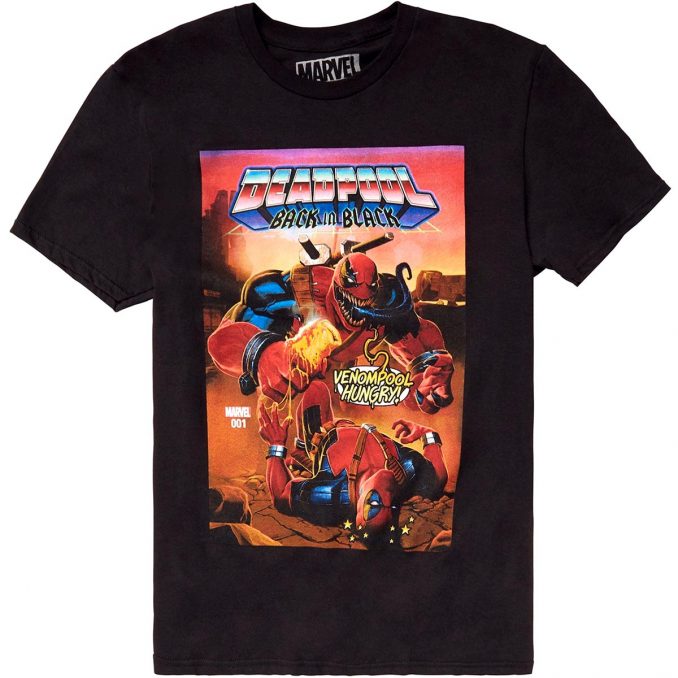 Deadpool was introduced to an alien symbiote that went on to become Spider-Man’s black costume and eventually, Venom. This T-shirt from Marvel features a comic image of Venom on top of Deadpool. 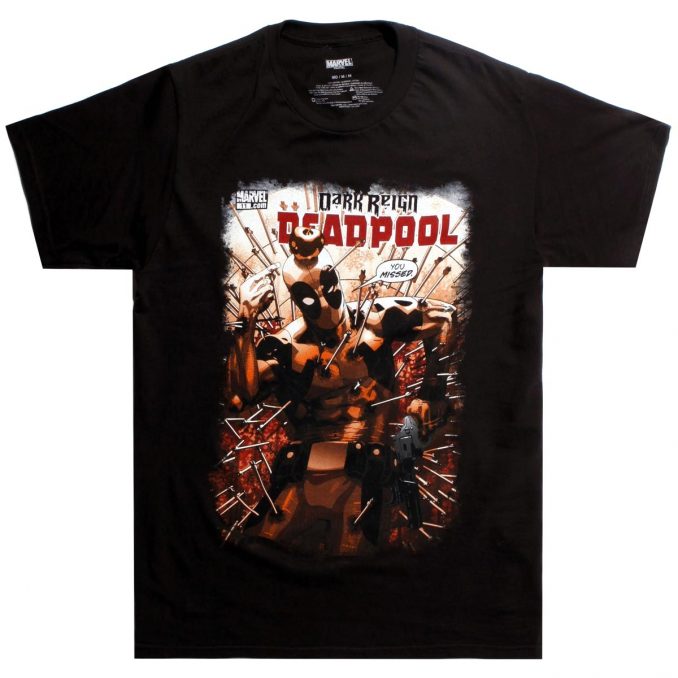 Deadpool’s got jokes, guys. This black T-shirt from Marvel has an image of Deadpool riddled with arrows, with an apple on his head and “You missed” text bubble.

GeekAlerts has been telling you for a while that NeatoShop has the best t-shirts around and we have shown you plenty of them in the past. You remember the Batman v Superman Slap T-Shirt, Sorcerer Supreme T-Shirt, Deadpool ‘Really Got To Go’ T-Shirt, Terminion T-Shirt, […]

This Deadpool Tacos Lightweight Bomber Jacket is Deadpool approved. That’s probably why it looks so awesome. It features a chenille Deadpool logo and name embroidery on front with an oversized neon Deadpool Tacos image on back. It is a great way to celebrate the merc […]

Forget Netflix and chill because Wade Wilson has another plan with the Deadpool ‘Let’s Cuddle and Eat Tacos’ T-Shirt. The Merc with the Mouth knows the important things in life, so after a busy day of busting heads and breaking the fourth wall, he just […]

Forget BvS because the Deadpool vs Tacos Men’s T-Shirt lets you know where the real battle is going down. Wade Wilson doesn’t do anything in a boring way, which is probably why he views a taco dinner on Sunday as a competition worthy of some […]