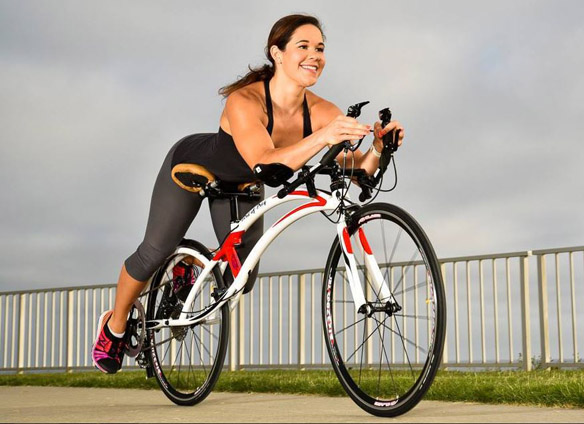 You spend a lot of time laying down on the couch. The Bird of Prey Bicycle lets you rock that same position when exercising… because really, why change a good thing?

Of course you’ve probably seen a standard bicycle that has you in a sitting position, and you might’ve even seen a recumbent bike that lets you kick back while riding around, but this beast is something different. Considered to be a semi-prone bicycle, the Bird of Prey lets you lean forward while still staying upright enough to look ahead without straining your neck.

6. COMFORT – What is more comfortable than lying down? Your hips are supported by soft “catcher mitt”, leather covered supports. Your elbows are supported by the aero bars at front and feet are clipped into the pedals at the rear. You have to ride the bike to understand how comfortable it really is. For people with back problems who have trouble sitting will find that resting on the front hips stretches the backbone with no compressed weight to create pain that you have from riding a sit down bike. This gives people with back problems the ability to ride a bike and get exercise.

7. BEAUTY – The Bird of Prey is beautiful with curving shapes. It appears and is aerodynamic.

8. STANDARD BIKE PARTS – The Bird of Prey uses all standard bike parts and accessories. I would like to say the Bird of Prey is 100% built in the USA but the aluminum for the frame can only be bought in Asia. The aluminum is welded in USA and the assembly is done in the Carlsbad, California Assembly Plant.

WARNING: The price is coming up. Sit down for it or it might knock you on your butt.

The unique battery-free Pedalite pedal lights for bicycles have been designed to “make cyclists more visible to motorists day and night, from a distance of up to 1km away and from any angle, including the side”. As soon as you start pedaling the Pedalite pedals […]

Your friends will want to keep a sharp eye out for the enemy when you’re wearing the Star Trek Cloaked Klingon Bird of Prey T-Shirt. Klingons are fierce warriors and the Bird of Prey is one of the most intimidating ships in the universe because […]

This Star Trek Klingon Bird-of-Prey 20-Inch Launching Rocket Model Kit will be super fun to launch with your kid. We may not be able to travel into space on the Enterprise, but at least we can launch a Klingon rocket into the air. With this […]

Last year we saw the Pedalite, a Bicycle MP3 Amplifier with Stereo Speakers, a 115 dB Bicycle Horn, and other bike gadgets. First out this year is this bicycle direction and brake lamp with an eight-tune horn.

In case you haven’t noticed, it is summer time; so stop making excuses and start exercising. The ElliptiGo is designed to give a low-impact, high-intensity workout to people of all fitness levels. By combining a running motion with components of a bicycle, you can enjoy […]