If looking backwards while riding your bike has nearly caused you to lose your life on many occasions, it’s time to get yourself a Bicycle Rearview Camera.

Just like those in-built rearview camera options that are available for cars, bike riders want in on that technology too. We don’t have eyes in the back of our heads or 360-vision like chameleons, so our next best bet is relying upon rearview cameras. 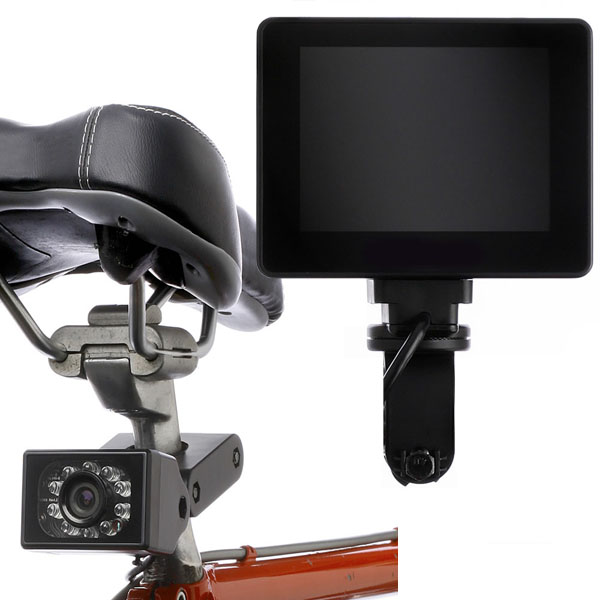 This is the camera system that mounts to a bicycle for providing a clear view of the road behind. The 2 1/4″ W x 1 1/2″ H camera mounts to a bicycle’s seat post, provides a rear-facing 75º field of view ideal for seeing approaching vehicles or other cyclists. A 78 3/4″ zip-tied cable that accommodates any frame geometry connects the camera to the handlebar-mounted 3 1/2″ TFT color monitor (fits bars up to 1 1/4″ diameter); quick-release mechanism removes the monitor easily from handlebars for charging. A circular pattern of red LEDs flash when the camera’s built-in sensor detects low-light conditions for visibility to traffic. Fully weather- and vibration-resistant. The camera system’s rechargeable battery provides up to 10 hours of operation from a two-hour charge using the included AC adapter. (1 lb.)

If you’ve got kids in tow, installing the rearview camera on your bike would add an extra degree of safety. When you’re on a bike, it can feel like it’s you against the world. Every precautionary measure will not be made in vain.

The Bicycle Rearview Camera is available through Hammacher Schlemmer for $179.95. It’s in the ‘Gifts for Dad’ section, so if Dad’s an avid biker, here’s a totally practical Father’s Day gift idea.

For girls, the wristlet is the perfect summertime accessory that acts as a seasonal replacement for all those big, honkin’ handbags. If you love wristlets and going to town on bike, you’re going to love the freedom you get from carrying the Bike Handlebar Wristlet. The wristlet attaches to the […]

Are you living in the big city and tired of dealing with public transportation?  Or maybe you just want some exercise but need a bicycle that is a good representation of who you are.  The iF Mode Folding Bicycle is a clean modern day rendition […]