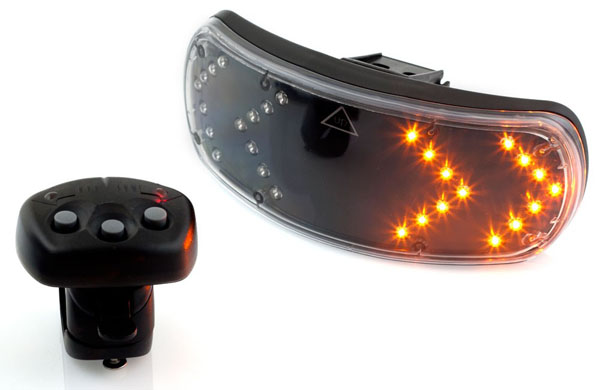 Surely many of you have made the resolution of hopping on your bike more often this year, and a big GA kudos goes out to you. While the health of your body and the earth benefit from biking, one drawback to biking is that you’re inadvertently putting your life more at risk. Making sure you are visible to everyone else is the key to accident prevention, and now more LED products are available to help bikers do just that. We’ve featured the Bikeglow Safety Light, the Ferris WheeLED Bike Light, and have even gone as far as testing out the Bicygnals LED Lights Indicator.

The Bike Signal Pod is similar to Bicygnals in concept, though both are quite different as far as design and features go. Ultimately, these LED products are putting an end to clumsy and confusing arm signaling. Secondly, they give everyone a clear idea as to where your bike is turning.

The Signal Pod is easy to use, and a breeze to set up! Simply connect the wireless control unit to the handlebars, and attach the Signal Pod light unit to the seat post. Then, during cycling, tap the control unit to transfer and display signals to the rear of your bicycle. Especially useful in traffic, where maximum control of your bike is needed, your hands need never leave the handlebars! The extra-bright LED light display allows you to indicate left and right clearly, with an extra hazard light option at your disposal. Audible beeps accompany the visual indicators, allowing you to alert those nearby at the touch of a button. 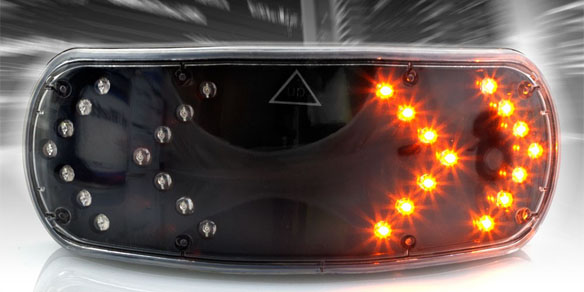 No matter how long I’ve been biking, I still almost fall down trying to signal with one arm on the handlebar. That’s why I’m guilty of not signaling unless absolutely necessary. Another problem I often encounter is being confused as to which arm is the bent one and which one swings out straight. It’s hard enough to remember left from right as it is. I can definitely appreciate how Bike Signal Pods or Bicygnals make bike signaling infinitely easier, much like the sensibility of turn signal switches in cars.

The Bike Signal Pod lights are mounted under the biker’s seat and are activated wirelessly through a 3-button remote that’s attached to either side of the handlebar. The buttons signal left, right, and the middle one is the hazard light feature. Double arrows for each direction blink brightly in series, inner to outer, to warn everyone in the rear where you’re headed. Apparently, there’s an idiot-proof feature that allows the lights to point in the direction you mean to signal towards, even if you’ve installed the lights upside-down.