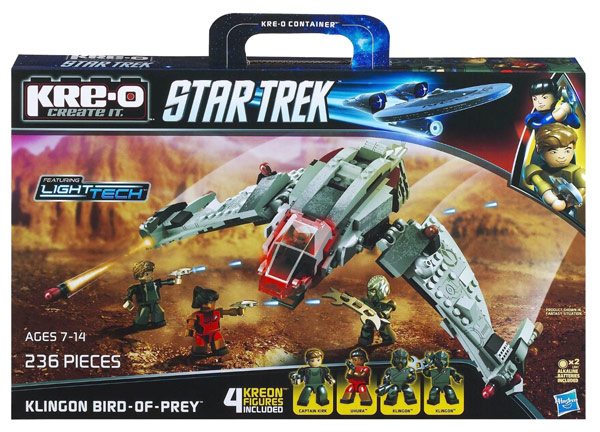 The Klingon Bird Of Prey has always been one of the coolest looking ships in the Klingon fleet. And that is still the case in the re-imagined Star Trek movies. This Star Trek Kre-O Klingon Bird of Prey Set will let you play as the bad guys.

This set is based on Star Trek Into Darkness and includes four Kreon mini-figures as well as authentic movie detail. Captain Kirk, Uhura, and two Klingon figures are included. You get 236 pieces in all.

This set makes a great gift and is pre-order ready for only $26.99 at Entertainment Earth. Also available for pre-order at Amazon.com.

I’m sure LEGO fans know all about the KRE-O brand of building blocks from Hasbro. If you don’t, you soon will. With Comic-Con 2012 set to kick off this week in San Diego, KRE-O will be displaying the KRE-O Star Trek U.S.S. Enterprise Set complete […]

This Star Trek Klingon Bird-of-Prey 20-Inch Launching Rocket Model Kit will be super fun to launch with your kid. We may not be able to travel into space on the Enterprise, but at least we can launch a Klingon rocket into the air. With this […]

Your friends will want to keep a sharp eye out for the enemy when you’re wearing the Star Trek Cloaked Klingon Bird of Prey T-Shirt. Klingons are fierce warriors and the Bird of Prey is one of the most intimidating ships in the universe because […]

Get ready to beam down for some out-of-this-world excitement as the action of Star Trek: Into Darkness comes home with the Star Trek Kre-O Transporter Trouble Set. Kirk and Spock are nowhere in sight (probably because they have their hands full with the evil John […]

This Star Trek Klingon Polo is a shirt for a true warrior. It is 100% cotton with 3 buttons and banded sleeves. March into battle or into the office like a true fearless fighter. It has a cool embroidered Klingon insignia that shows your Klingon […]