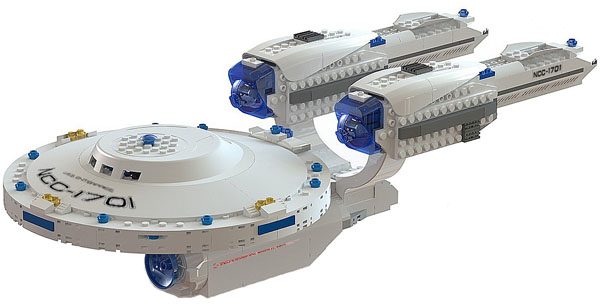 I’m sure LEGO fans know all about the KRE-O brand of building blocks from Hasbro. If you don’t, you soon will. With Comic-Con 2012 set to kick off this week in San Diego, KRE-O will be displaying the KRE-O Star Trek U.S.S. Enterprise Set complete with Captain Kirk, Spock and Bones KREON figures at the Hasbro Comic-Con booth (#3213) beginning on preview night, July 11, 2012.

The USS Enterprise set is based on the J.J. Abrams upcoming Star Trek sequel from Paramount Pictures and the KRE-O Star Trek line features a variety of vehicles from the movie along with KREON figures (Hasbro’s name for minifigures) based on classic Star Trek characters.

“Comic-Con International is the perfect place to give fans a sneak peek at upcoming KRE-O STAR TREK products and the teaser trailer for the KRE-O digital short produced by Bad Robot,” said Kimberly Boyd, global KRE-O brand director at Hasbro. “The KRE-O brand is enjoyed by consumers around the world and Hasbro is thrilled to work with the amazing teams at CBS Consumer Products, Bad Robot and Paramount Pictures to bring the STAR TREK property to life with KRE-O building sets.”

If you aren’t lucky enough to get tickets to Comic-Con to witness this cool KRE-O set for yourself, stay tuned to GeekAlerts for more details on the USS Enterprise Set and other cool set from the Transformers line and KRE-O Battleship line, which will also be on display in the Hasbro booth.

If you’re a major Star Trek fan, chances are you loaded up on some of the really cool Star Trek gadgets like the Enterprise Bottle Opener, Enterprise Pizza Slicer, and Klingon Corkscrew. Now you have a place to keep all these gizmos neatly organized: the […]

Get ready to beam down for some out-of-this-world excitement as the action of Star Trek: Into Darkness comes home with the Star Trek Kre-O Transporter Trouble Set. Kirk and Spock are nowhere in sight (probably because they have their hands full with the evil John […]

You’ve got to give Britain its props for coming up with some stylish objects; their taxi cabs, luxury autos, mailboxes, phone booths, oh and those Mad Hatter hats seen at the Royal Wedding. If you’ve got a ton of DVDs and CDs but don’t have a fashionable place to store them all […]

Space may be the final frontier, but you are stuck on Earth. So that means you don’t have a spacedock to construct a starship. You’ll have to make one with paper. And it will be awesome. This DIY Paper USS Enterprise 1701 Kit is pretty […]

When it comes to first contact, the scene depicted in the Star Trek USS Enterprise First Contact Art Print can go down in the Starfleet history books as a FAIL! Nothing says ‘we come in peace’ like crashing your giant starship in a field, but […]

After having been used as a chandelier, telephone and a putter, it is finally time to let the classic spaceship rest in piece at a Trekkie’s home near you. This replica of the USS Enterprise from Star Trek II: The Wrath of Khan features over […]