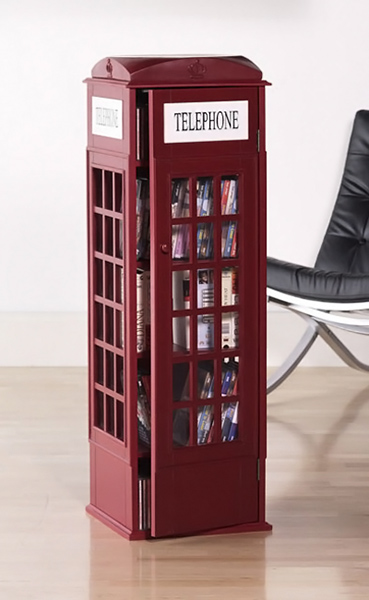 You’ve got to give Britain its props for coming up with some stylish objects; their taxi cabs, luxury autos, mailboxes, phone booths, oh and those Mad Hatter hats seen at the Royal Wedding. If you’ve got a ton of DVDs and CDs but don’t have a fashionable place to store them all (and you’ve got a bit of an English fetish), the Brit-inspired Phone Booth Media Cabinet might just be what you’re after.

This isn’t the first time that phone booths have been creatively taken out of context. We all enjoyed how Dr. Who used the TARDIS, a blue British police box, to travel through time. By the way, we’ve got some good reads on the Dr. Who Disappearing TARDIS Mug, TARDIS USB Hub and a Levitating TARDIS, if you’re a big D.W. fan. And look at Clark Kent and how he was able to duck into a phone booth at warp speed and come out as none other than Superman. And what about Bill and Ted’s time travel during their Excellent Adventure? That was when Keanu Reeves was more fun. Phone booths are more mystical now than ever, since they’re becoming such antiques.

The Phone Booth Media Cabinet is painted in a subdued red, which gives a room a nice punch without looking overly obnoxious. With five fixed shelves, you can store your Dr. Who, Superman and Bill & Ted DVDs discreetly, and about 130 more DVDs or prized possessions as well.

If you have a hard time keeping track of your phone, you could probably figure out a way to store your phone(s) in there while at home, too. Since it looks like a phone booth and has the words “Telephone” written on it, it might be the perfect spot for a telephone to be. Just don’t try to get inside it and expect random things to happen, though.

The Phone Booth Media Cabinet is priced at $170 at SkyMall.com.

Make decorating the tree this year more of a family event. Get everyone in the whole clan to help out over warm mugs of hot chocolate and eggnog, and bond as you share stories and reminisce about the good, old days while hanging up the […]

Although this device has multiple functions, surprisingly “telephone” is not one of them. Yes, it make look just like a retro desktop telephone, but you can’t answer this USB Retro Telephone Light with Alarm Clock. Instead, plug it into a USB port to power the […]

I love Superman, but I kind of miss the old days when he changed his costume in a phone booth. Phones booths are gone and so if that piece of Superman mythology. It may be gone from the comics, but you can relive those days […]

So you want to become a bird photographer but don’t want to spend thousands of dollars on a telephoto lens that will let you get close to the action. No problem, because the Bird Photo Booth will let you get up-close and personal with your […]

Even masters of time and space like the Timelords need clocks for important meetings and stuff. This Doctor Who Tardis Phone Booth Wall Clock is perfect for any Doctor Who fan. It is designed to look like the Doctor’s TARDIS, but with numbers on the […]

I don’t know why you might be interested in a phone that’s hidden away in a replica of a blue 1920’s phone box, but… hey! Wait a minute! That’s not an ordinary phone box; it’s the Doctor Who TARDIS Telephone, and that changes everything. It […]

Retro looks are always cool, but add modern technology and you got yourself a real winner. The new line Pyle Retro Rotary Smartphone Stations are designed to give your home a retro feel. They feature simple-to-use buttons for answering landlines and smartphone calls and work […]

Haven’t you heard? Retro is in lately, especially when it comes to phones. If orange wasn’t your thing, then you probably weren’t very impressed with the Sagemcom Sixty Cordless Telephone. But if bold red is more up your alley, then you might want to check […]

Remember that cool Tardis duct tape bag we featured awhile back? This Doctor Who Tardis Phone Booth Messenger Bag is another great way for Doctor Who fans to carry their stuff. It may not be bigger on the inside, but it is all awesome. This […]

Organize that pile of business cards on your desk with this Mini Business Card File Cabinet. It looks exactly like a file cabinet, except that it’s tiny, so it can easily fit on your desktop. With two pull-out drawers, it has room to store 500 […]

Where the retro sixties look meets high-tech gadgetry, you get the Sagemcom Sixty Cordless Telephone.  The Sixty as they call it, is a very cool looking cordless phone that offers a sleek modern day rendition of the 60’s style rotary dial telephone.  Packed with high-tech […]