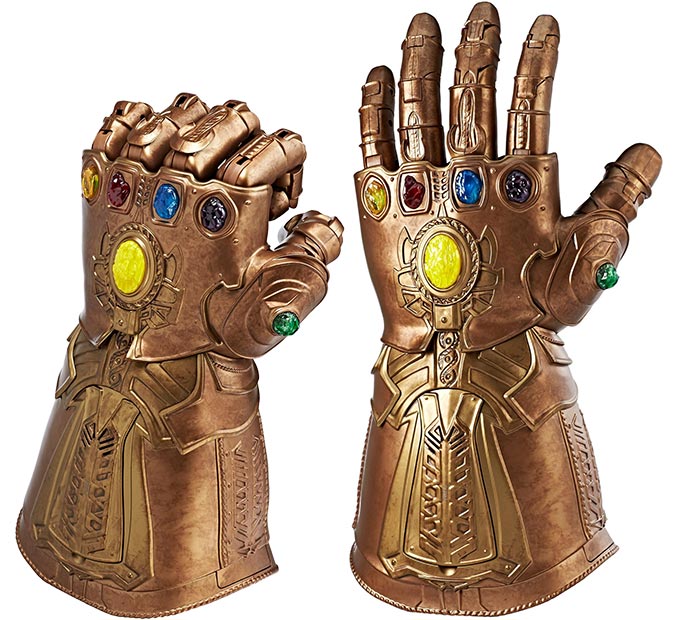 While nothing looks more realistic than the Infinity Gauntlet Replica we showcased a while back, this Marvel Legends Articulated Electronic Infinity Gauntlet has it beat because you can actually wear it! Plus, it is much less expensive.

With premium design, intricate detailing, 6 light-up Infinity Stones, and Avengers: Infinity War movie-inspired sounds, this Marvel Legends Series Infinity Gauntlet is suitable for display, cosplay, or just having fun. Slip it on, watch the pulsating light effects of the Infinity Stones, and imagine having the power of the Universe at your beck and call. Hold it up and slowly make a fist, which is easily done because this electronic Infinity Gauntlet features individually articulated finger movement.

A Mad Titan. Six Infinity Stones that control the multi-verse. One mission to destroy the galaxy, another to save it. A team of heroes ready for the fight. Whoever wields the Infinity Gauntlet wields the fate of the universe!

Bring one of the most powerful weapons in the Marvel Universe to life! With this premium Infinity Gauntlet Articulated Electronic Fist from the Marvel Legends Series, lift up the power of the Infinity Stones and imagine taking control of the galaxy with the notorious gauntlet worn by the supreme being, Thanos.

Inspired by the upcoming Avengers: Infinity War movie, this Infinity Gauntlet from the Marvel Legends Series features premium design and styling, as well as intricate detailing on the gauntlet and 6 light-up Infinity Stones. Features pulsating light effects, movie-inspired sounds, and individually articulated finger movement, as well as a fist-lock feature for display.

The Marvel Legends Series Infinity Gauntlet Articulated Electronic Fist has a list price of $99.99 and is sold at Best Buy, Target, Walmart, Entertainment Earth, Amazon, and Hasbro.com. The problem is that it has been frequently out of stock everywhere since it came out. The solution is to go to Rout.com and click the Track button. Set the target price of $100, and it will automatically let you know when it is back in stock the same way Rout lets you know when something goes on sale at or below your target price.

These Marvel Infinity Gauntlet Stud Earrings look Marvelous. You get a pair of Infinity Gauntlets loaded with Infinity Stones. Now you have the power. They are made from 316L surgical-grade stainless steel and are a great way to accessorize with Marvel. Perfect for the geek […]

Sometimes it’s tough being a geek. Like when you play RPGs and other games that require a lot of dice and a lot of dice rolls. This handy +10 Electronic Dice Barbarian Gauntlet will make life easier for you, while making life geekier as well. […]

Reality, power, space, time, the mind, and the soul are yours to control with the Infinity Gauntlet Handchain. Okay, this bracelet/ring/chain combo won’t actually let you control the elements of the universe but it will give you complete mastery over style and fashion… and Thanos […]