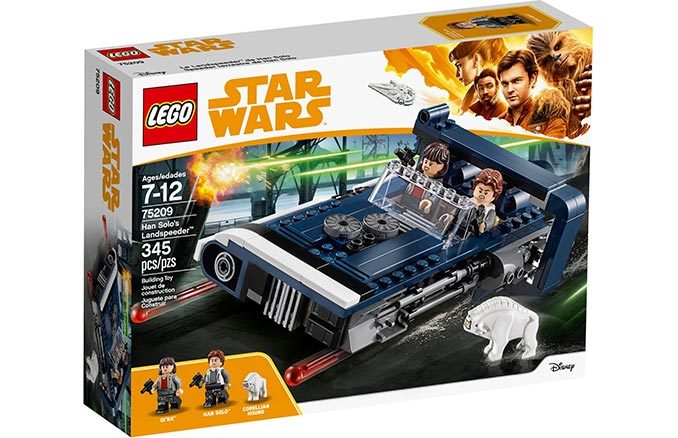 Anyone that has seen the Teaser Trailer to the upcoming Solo Movie knows that it features some epic landspeeder chase sequences. Now you can recreate those high speed action scenes with the LEGO Star Wars Han Solo’s Landspeeder #75209. This set features 345 pieces and includes Han Solo, Qi’ra, and Corellian Hound minifigures. The landspeeder itself has a cockpit that fits two minifigures, two spring loaded shooters, hidden wheels for a hover effect, an opening hood with storage compartment, rear storage compartment with secret cargo, and a removable engine.

LEGO Star Wars Han Solo’s Landspeeder #75209 is $29.99 at LEGO Shop. You can also find it at Target, Amazon, and Shop Disney. If you like Solo: A Star Wars Story inspired LEGO sets, check out the Kessel Run Millennium Falcon.

If you have the LEGO Han Solo Landspeeder you also need this LEGO Star Wars Moloch’s Landspeeder #75210 to recreate some of the cool chase scenes that will be in the upcoming Solo Movie. This 464 piece LEGO set can be used to build the […]