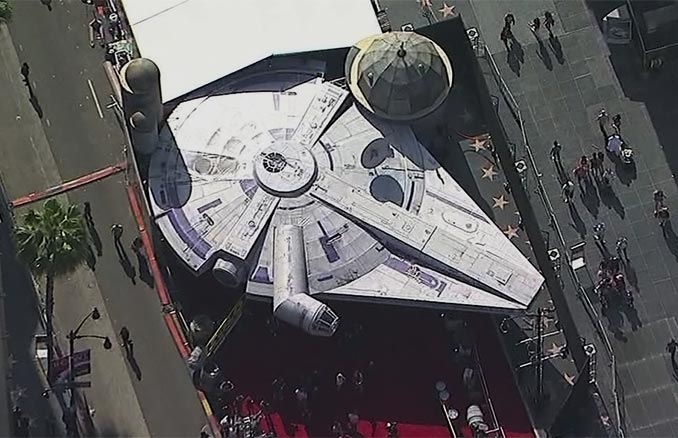 Due to issues in production and rumors over the last couple years, there were two major fears. One was that the movie would be a giant disaster and wouldn’t even feel like a Star Wars film. The second was that Alden Ehrenreich would be a poor excuse for a Han Solo. Fortunately, the reactions on Twitter put both of those fears to rest. Overall, viewers thought the movie was great (although perhaps a bit rough in the first act), that it felt like Star Wars, and that Alden Ehrenreich and the whole cast nailed it.

Here are some of the Solo: A Star Wars Story Premiere Reactions.

Ben Mekler, from the Nerdist, thought Solo was energetic and fresh, and that the “cast crushed it.”

Thrilled to say #SoloAStarWarsStory WORKS. Cast crushed it – true to what we know yet energetic, fresh. Only subpar thing – at least forty minutes wasted on scenes where characters wolf down raw vidalia onions? Third act drags too. Still, this is a REAL Star Wars movie – loved it

The Editor-in-Chief of Rotten Tomatoes, Joel Meares, thought it was “kinda a blast” and that “Alden Ehrenreich has swagger.”

Wow. Just come out of #SoloAStarWarsStory and can confirm it’s kinda a blast. @donaldglover was as perfect as expected, but Alden Ehrenreich has swagger to match, and spare.

Kevin Polowy, senior correspondent for Yahoo Entertainment, thought it was “reaaaaalllly good” and “fun as hell.”

#SoloAStarWarsStory is reaaaaalllly good. Fun as hell. It’s a straight intergalactic heist movie, kind of refreshing to see a Star Wars movie w/o a Death Star or the rebellion’s fate at stake. Alden Ehrenreich is super impressive as Han, but L3 might be my favorite new character.

Joseph Schmidt from ComicBook.com said it was full of surprises and “was a TON of fun.”

Wow. #SoloAStarWarsStory was a TON of fun. Felt more like a Star Wars movie than Rogue One. Don’t look up spoilers! It’s full of surprises.

Brian Tong went so far as to say that Solo: A Star Wars Story is a better movie than Avengers: Infinity War.

WOW! #SoloAStarWarsStory! I felt like I was watching a @StarWars movie again. So many great moments for the fans AND surprises.. I’ve got the feels after this one…MORE than #InfinityWar.

Infinity War was a spectacle and amazing movie. You know how much I love the MCU. But I’m saying it. #SoloAStarWarsStory was a better MOVIE.

Alden Ehrenreich is the real deal, Thandie Newton is who I want to be when I grow up, and Phoebe Waller-Bridge’s L3… well we’ll talk about that later. 😃 #SoloAStarWarsStory

The reaction from Kate Erbland, film editor at IndieWire, was a bit mixed, but thought that after it finds its feet and kicks in “it totally flies.”

#SoloAStarWarsStory: It takes a bit for it to find its feet and for AE to turn on enough charm to make you forget he’s not HF. But once it kicks into its hey-let’s-make-a-crew and yes-also-do-a-heist stuff, it totally flies.

Clayton Sandell, from ABC news, said that he loved it and warned to watch out for spoilers before you get a chance to see it.

Jim Vejvoda‏ from IGN Movies says that he “was pleasantly surprised.”

#Solo is afun! I was pleasantly surprised that it worked as well as it did given all the behind the scenes drama & retooling. Charming cast, fun action, good jokes, good fan service but still does its own thing. #StarWars will be fine.

This is the grungiest, most grunt-level blue collar #StarWars ever and I am here for it. #Solo

Got out of #SoloAStarWarsStory and I’m completely floored. This movie seriously holds up! I was on the edge of my seat and had so much fun watching it! Interviewing the stars of the film tomorrow, cannot wait ❣️ pic.twitter.com/7GAr6h2c8q

I’m not sure if Mark Hamill’s opinion is unbiased, but he says that he “can’t wait to see it AGAIN.”

NO SPOILERS until everyone's seen it, but I can't wait to see it AGAIN. 👍#SoHighFromSolo pic.twitter.com/LTqDAKIHVF

Also from IGN, Tom Jorgensen‏ though Solo was “a ton of fun!” He also praised performances of Alden Ehrenreich and Donald Glover as Han Solo and Lando Calrissian.

#Solo is a ton of fun! Alden Ehrenreich is full of charm and definitely does right by Harrison Ford. Not to mention Donald Glover, who's equally great as Lando.

Don't let the drama and rumors fool you, this is a seriously fun, exciting addition to the Star Wars universe!

The Director of Video Operations at Collider Video, Dennis Tzeng, wasn’t thrilled. He thought it was mostly fun, but the story was too predictable.

#SoloAStarWarsStory was a mostly fun adventure and solid performances but with a predictable story. Never will be one of my favorite #StarWars movies but I enjoyed enough of it.

Kara Warner from People Magazine was must more excited. She enthused that it was “a friggin TREAT” and that it was “so much fun.”

Ooo @StarWars fans you are in for a friggin TREAT w/ #Solo. Killer cast. A great adventure. So much fun. #hansolo

Michelle Buchman from Nerdist praised it for being charming and funny, and she declared it her new favorite Star Wars movie.

I loved #SoloAStarWarsStory so much. It’s a western. A caper. Funny with so much heart. It’s got so much surprises that fans are going to love. Donald Glover is charming x1000. Alden Ehrenreich is a great #HanSolo and just know I’ve been saying this for years! Fave new #StarWars.

Senior Entertainment Writer for Uproxx, Mike Ryan, though it was hit or miss. However, he was impressed with Donald Glover’s performance and thought that once “the Kessel Run heist plot kicks in, it’s a whole lot of fun.”

It does take a bit to get used to Alden as Han, but after 30 minutes or so your brain adjusts. (Also I've now finally seen Clint Howard in a Star Wars movie.) #soloastarwarsstory

There’s some fun to be had with #SoloAStarWarsStory. Ehrenreich was solid and really enjoyed Glover and Waller-Bridge as L3, but not convinced we needed a young Han Solo movie. Was really hoping for higher stakes, more energy and depth.

Umberto Gonzalez, Film Reporter for TheWrap, said “the movie is an absolute blast to hyperspace!”

Editor-in-Chief of Collider.com, Steven Weintraub‏, noted that if Disney was willing to show the film weeks before release, it most likely isn’t any where as bad as the rumors would have you believe. After seeing it he declared that the “film is a blast and a welcome addition to the Star Wars universe.”

I figured if @DisneyStudios was willing to show 'Solo: A Star Wars Story' a few weeks before release it must be good and it absolutely is. Film is a blast and a welcome addition to the Star Wars universe. @RealRonHoward you did a great job. Congrats. pic.twitter.com/1pkWH2y6qE

#Solo was fantastic. Rock solid, straight-down-the-middle #StarWars movie. If you’re looking for a palette cleanser after #TheLastJedi, this is it!! pic.twitter.com/2Qjbk4UWcQ

Amy Ratcliffe, Managing Editor at Nerdist, called it “an absolute delight of a romp with heart, charm, and action.”

#Solo was an absolute delight of a romp with heart, charm, and action. Donald Glover is as Lando as can be, and L3-37 is the BEST. I can't wait to see it again.

Wendy Lee Szany from The Movie Couple, wasn’t thrilled. While there were some “great action sequences” some of the moments “were a bit too on the nose.”

Solo: A Star Wars Story has a light tone and has some great action sequences. There were great moments but some were a bit too on the nose for me. The Chewie/Han bromance is the thing to watch for.

Kristopher Tapley from Variety says that Solo: A Star Wars story has “lots of great action.”

Solo is straight-up overflowing with winks, but lots of great action. And just when I was thinking, “There’s no way to spoil this movie,” well — enjoy that bit.

Solo: A Star Wars Story is a goddamn delight. It’s a non-stop adventure packed with way more emotion than your expecting. You’ll have a smile on your face the whole time and leave eager for more. pic.twitter.com/fOsF7Tr95L

I really dug #SoloAStarWarsStory! I woke up this morning questioning whether I was excited for this movie and walked out ready to see Han’s next adventure on this path. It’s a super solid movie and feels true to what makes #StarWars fun.

Jenna Busch, Founder/EIC of LegionofLeia, calls it “a blast of an adventure.”

#SoloAStarWarsStory has a bit of a rough start, but it was a blast of of an adventure. And yes, Donald Glover steals the movie! But you already knew that. pic.twitter.com/4SGiq6tDmQ

Simon Thompson, Film/Entertainment Journalist, was really worried about Solo: A Star Wars Story, but after seeing it “those concerns are totally laid to rest.”

So, I was REALLY worried about #SoloAStarWarsStory but those concerns are totally laid to rest. A movie for fans AND those totally fresh to the Star Wars franchise. Heart, humor and a Falcon full of top notch action. From a worry to a favorite. Very, very happy! pic.twitter.com/VhvBSDFvjE

Finally, Rob Keyes‏, Editorial Director at ScreenRant, compliments the blaster action scenes and vehicle chases in the “most real looking film in the franchise.”

Solo: A Star Wars Story is more of what I loved about Rogue One. Most real looking film in the franchise, and the best blaster actions scenes and vehicle chases. #SoloAStarWarsStory

If you want more about the Solo: A Star Wars Story Premiere, watch the red carpet coverage: