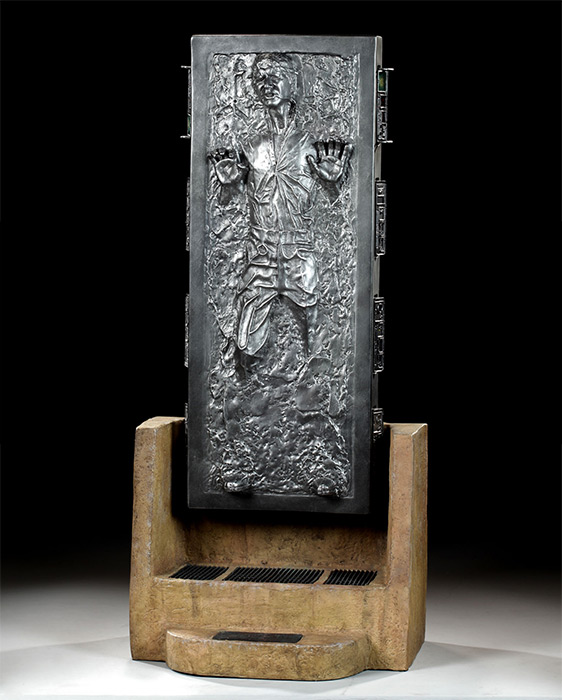 Han Solo frozen in Carbonite is a popular theme for cool products, including Ice Cube Trays, Chocolate Bars, Mimobots, and even a Desk. However, if you are really into Star Wars collectibles you’ll want to decorate your home or office with this incredibly detailed Han Solo in Carbonite Premium Format Figure.

It is an intricately crafted 1:4 scale replica that stands about 25.5 inches tall and weighs about 12 pounds. The quality and detail make this a stunning piece to display, and the variety of illumination effects give it the versatility to recreate various scenes from the Star Wars films. For example, it features a light to simulate the bright glow when Han Solo is thawed out by Princess Leia disguised as Boushh.

The Han Solo in Carbonite Premium Format figure captures every detail of the frozen smuggler as Jabba’s trophy. Each piece is individually painted and finished, each with its own unique quality and detail that is the trademark of a handcrafted Sideshow Collectibles product. The piece features several illumination effects that provide added authenticity, simulating pivotal scenes from the film – a projecting light within the base to illuminate the carbonite block, side panel lights, and a light simulating the superheat melting process that frees Han Solo.

Pre-order the Han Solo in Carbonite Premium Format Figure for $299.99 from Sideshow Collectibles. (Update: Link removed because the page no longer exists.)