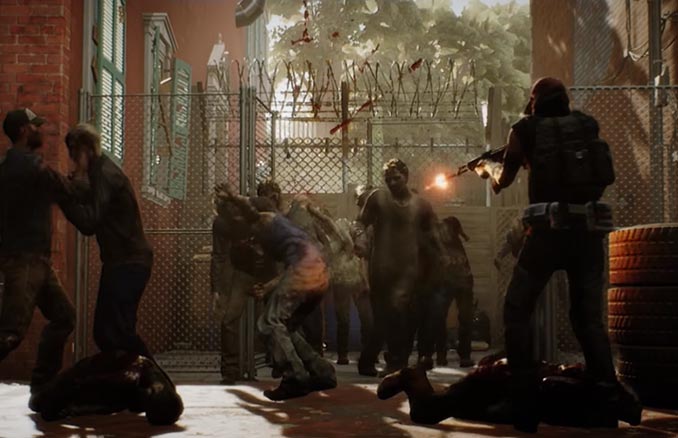 There’s a brand new Overkill’s The Walking Dead – Gameplay Trailer and it is bloody and violent, with zombie kills via machine gun, scoped rifle, pistol, crossbow, fire, and being stabbed in the head with what looks like a screwdriver. We’ve seen plenty of cinematic trailers for this game already, such as their character intoductions for Heather, Maya, and Grant.

Although it is a gameplay trailer, it still contains a lot of cinematics. However, it is just the gameplay teaser trailer, so we can expect an upcoming gameplay trailer that shows us much more of the real game action.

Launches November 6th in North America, November 8th in Europe/everywhere else. Pre order available on PC, Playstation 4, Xbox One and in stores. Pre-order June 12th for access to exclusive in-game items. Read more about the game at www.overkillsthewalkingdead.com

Overkill’s The Walking Dead will be released in the USA on November 6, 2018, but it can already be pre-ordered. As typical for games, pre-ordering gives you exclusive in-game bonus items. There is a Deluxe Edition, which includes the game, collectibles, and exclusive in-game content for $79.99. It is only at GameStop and is available for either the Xbox One or PlayStation 4. The standard edition of the game is $59.99 for either the Xbox One or PS4 version, and can be preordered at Best Buy, GameStop, or Amazon.